Innsbruck Cathedral, dedicated to Saint James, has survived WWII and has been meticulously repaired throughout time.

Innsbruck is an Alps city that envelops you in its magnificent mystique the moment you step foot inside its borders. Innsbruck is the capital of Tyrol in Austria, as well as a winter sports destination. This city is well-known for its flourishing contrast of imperial history and modern architecture. Wherever you go, you will notice a gentle combination of peacefulness, breathtaking vistas, and jagged rock spires. 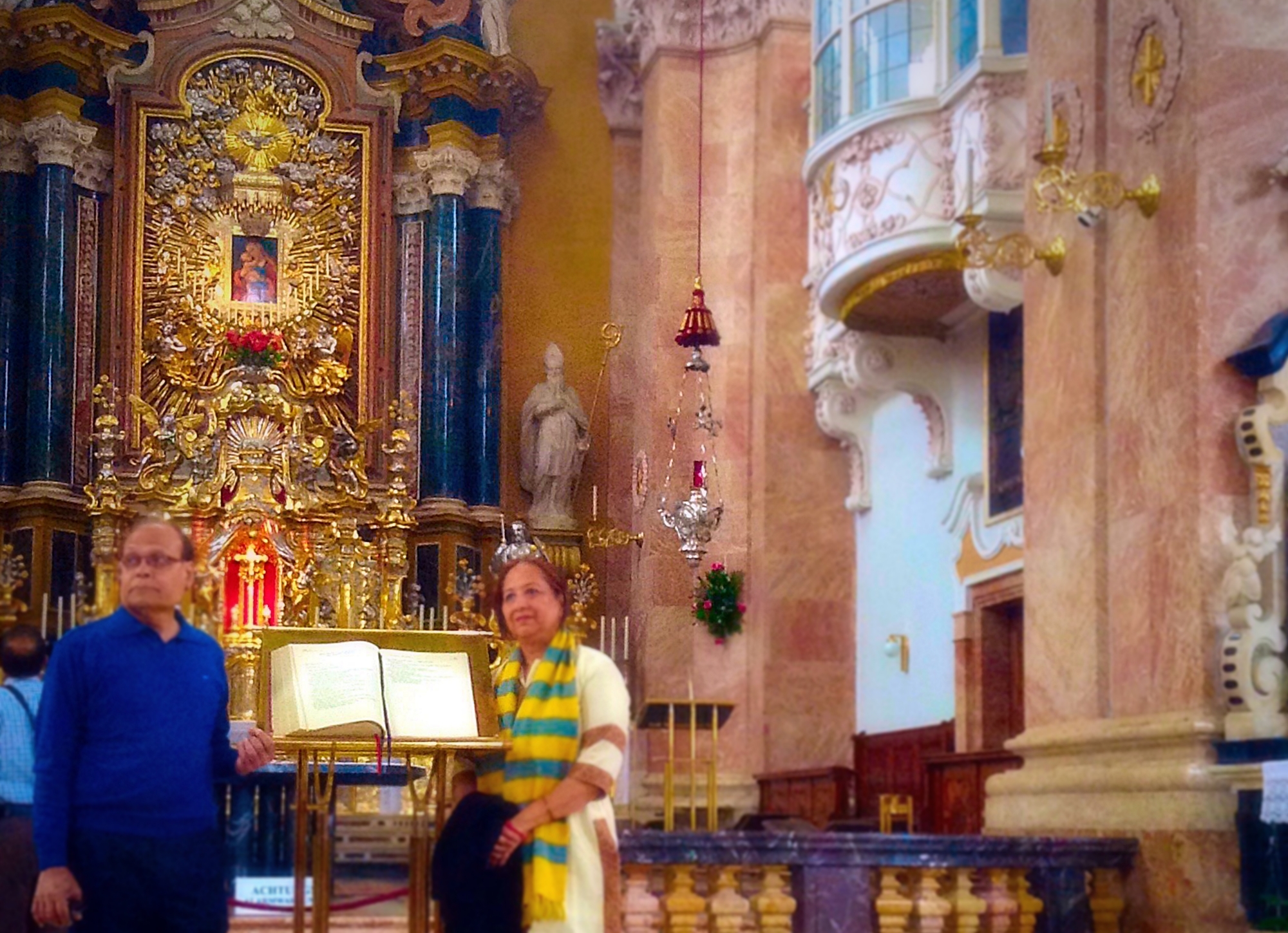 This small land is, by and large, a fleeting picture, with enormously scattered meadows, cowbell chimes, towering mountainside, and endless alpine grandeur as its theme. Every backdrop is a sight to behold! Especially if you enjoy quiet. This part of the globe is especially tranquil. That’s the sort I enjoy. The city, on the other hand, will take you under its wing the instant you set eyes on it. 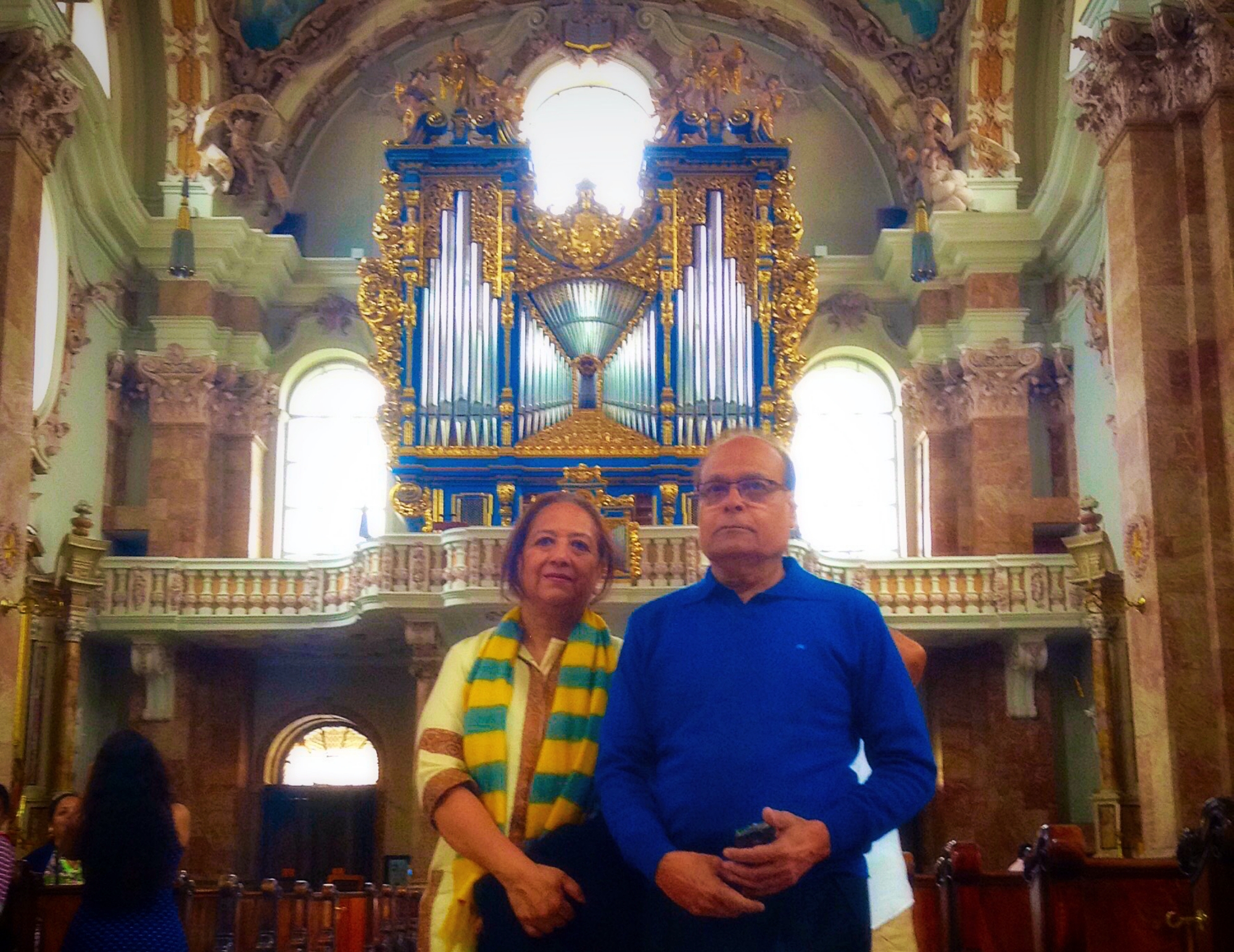 The Golden Roof, Court Church, and Ambras Castle are among the city’s most famous landmarks. But, you can’t leave the city without seeing the iconic Innsbruck Cathedral, built in baroque style. Innsbruck Cathedral, dedicated to Saint James, has survived WWII and has been meticulously repaired throughout time. It was pitched on a 12th-century foundation in the 17th century. If you think that’s cool, you’ll be pleasantly delighted with the interiors. 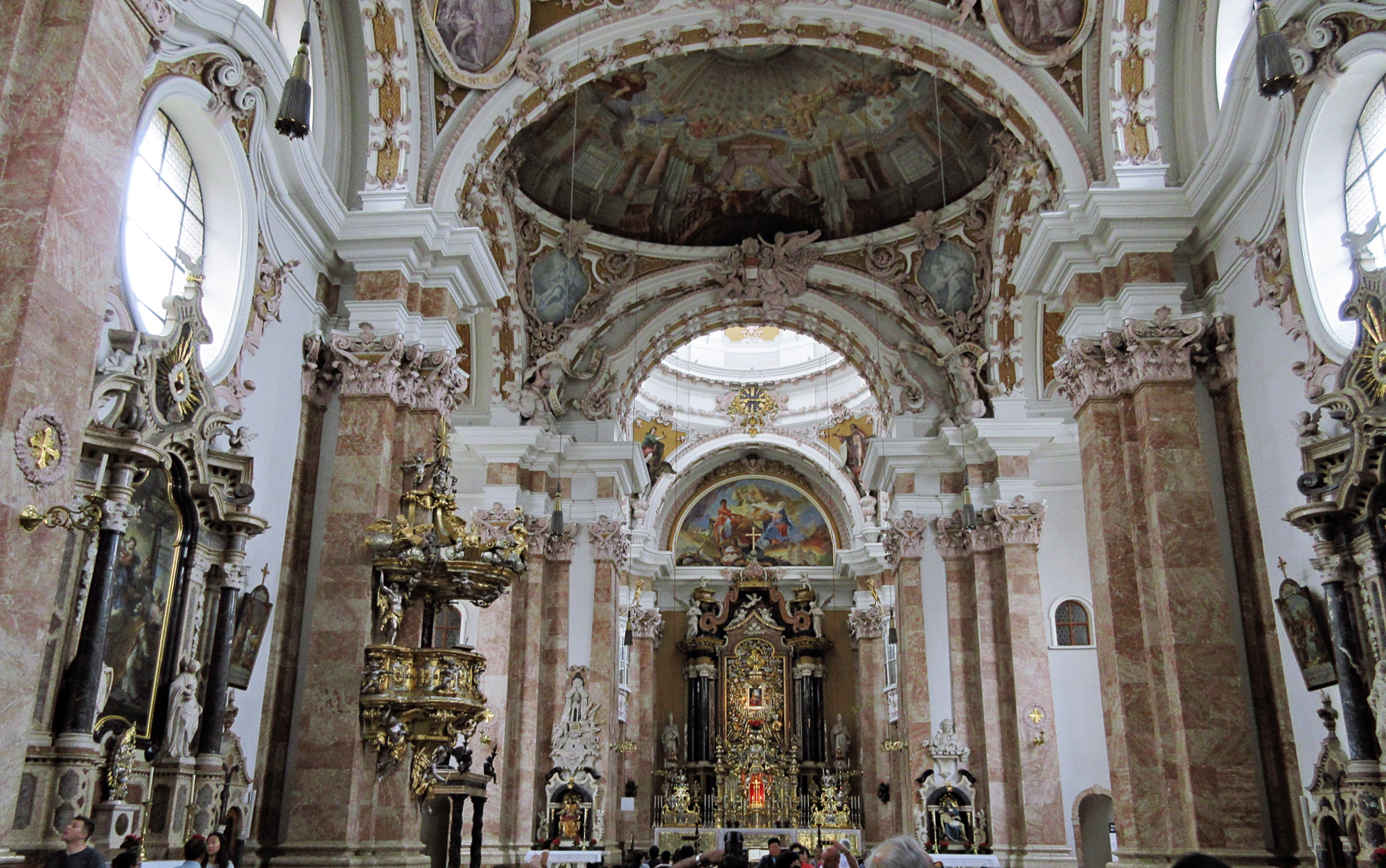 The inside of the cathedral is lavishly ornamented with Romanesque patterns. Three arches extrude into three-dimensional impressions of majestic wall/ceiling art as you gaze around and above. The dome ceilings that span the nave are also significant. It is said that the 15th-century masterwork painting of Maria Hilf by artist Lucas Cranach is what makes this cathedral so attractive. This picture, which hangs over the main altar, represents the Christian world’s idolisation. 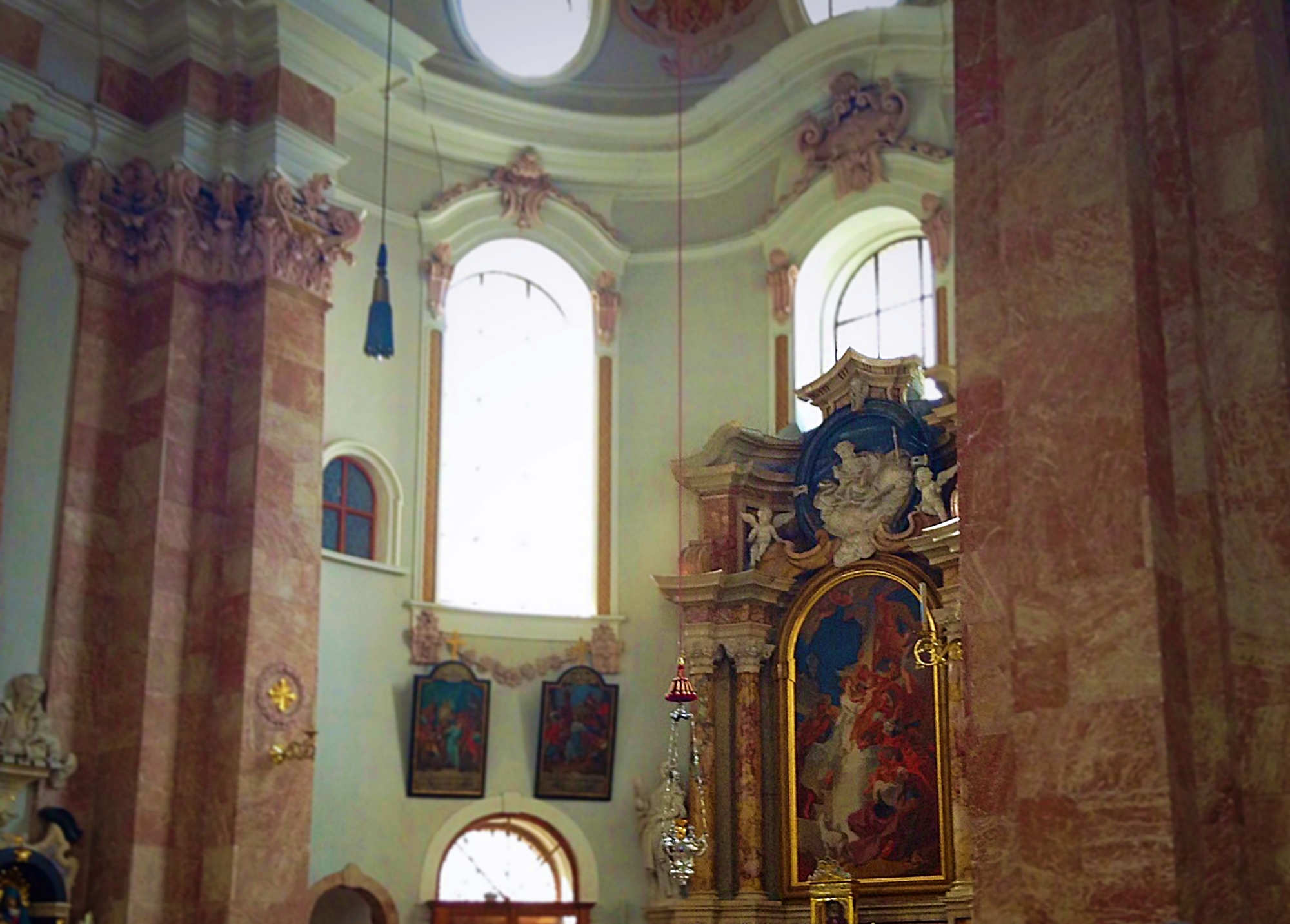 The interiors, on the other hand, are transited by a series of arches cast by heavy pillars with marble lesenes that extend up to the painted wooden ceiling. As you can see, the cathedral’s soaring dome adorns the high altar, eliciting the unique time when it was built. The frescoes, in my opinion, are the cathedral’s most sensational feature. When the sun leans down to kiss the altar, it’s quite a sight. Both the light and the energies fill the space with a powerful sense of wellbeing. 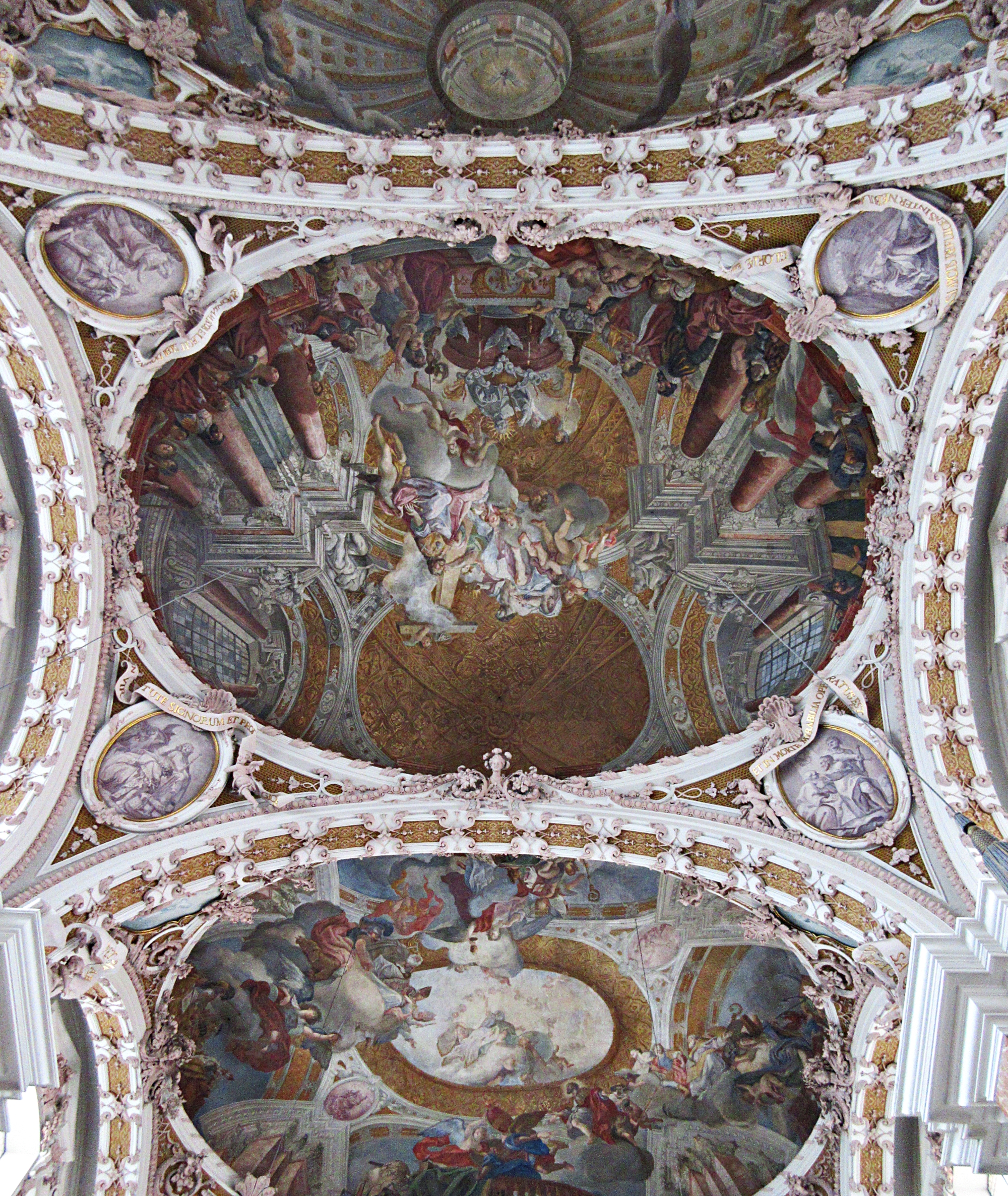 Cosmas Damian, a Bavarian artist, made a noteworthy contribution to this creative journey. Through his paintings, Damian was able to create a peculiar optical illusion. As a result of the light rays passing through the glass windows, these artworks appear to be too genuine. The four lifecycles of Saint James are recounted, in one of the painted murals. Overall, you will be astounded by the stunning geometric designs. The creative architects that put this excellent notion into action were Benedetti and Christoforo. 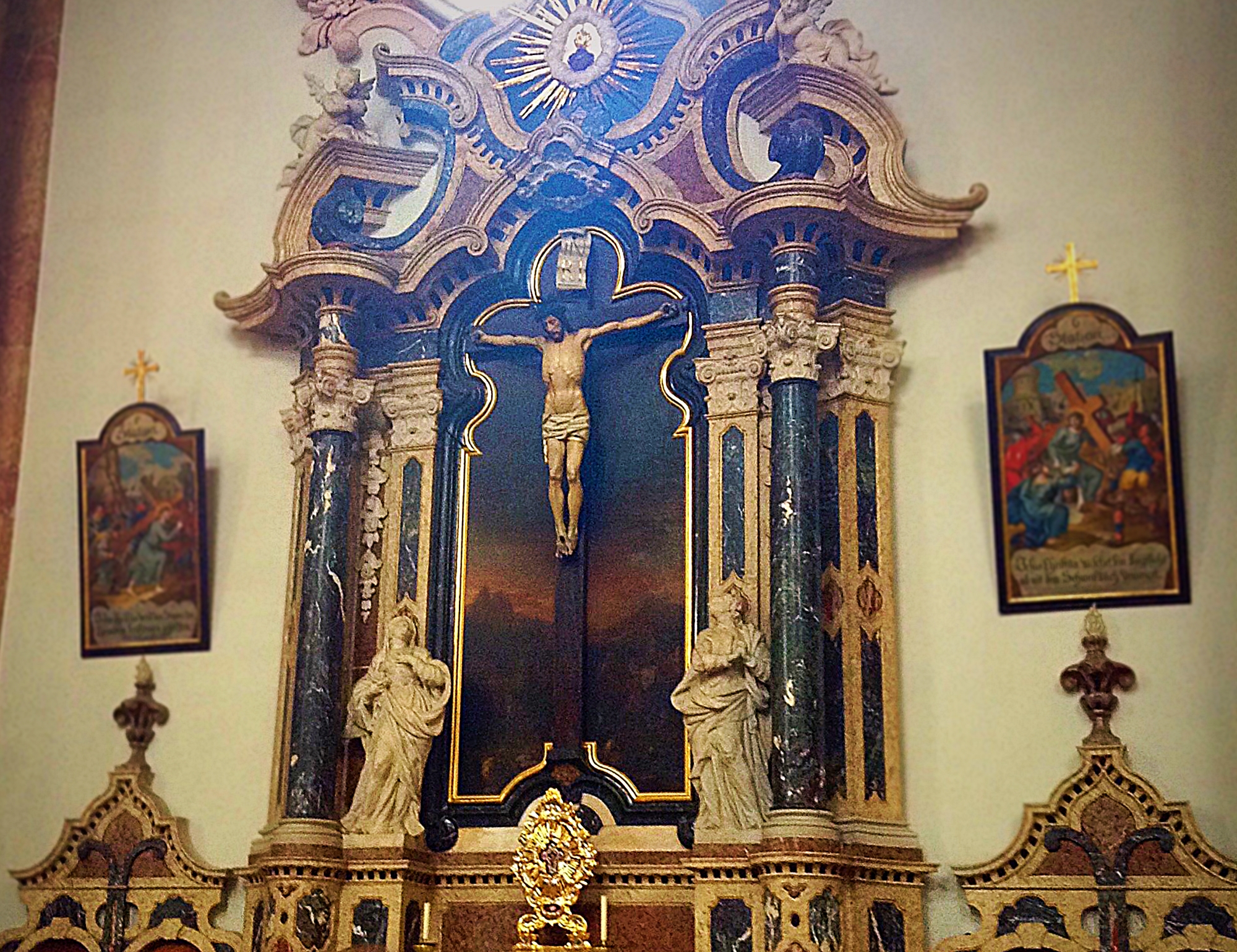 What’s more considerable is that Innsbruck Cathedral has been well restored through wars and earthquakes. Innsbruck Cathedral is home to Tyrol’s second-largest antique bell, in addition to its architectural splendour. This bell is rung every Friday at 3 p.m. as a remembrance of Jesus’ demise. Aside from it, there are eight other church bells, each of which is devoted to a separate Saint. According to legend, there were 48 bells in the late 1800s. These were set near the peace carillon housed in the North Tower. This carillon is Austria’s biggest, weighing 4100 kg. The Royal Eijsbouts bell foundry created the design. Arrive at the cathedral around 12:10 p.m. to hear the bells.