A magnificently constructed old landmark 25 kilometres outside of Ahmedabad turned out to be a genuinely unique experience for me during my recent Gujarat holiday. For decades, Adalaj Stepwell, also referred to by its Gujarati name “Adlaj-Ni-Vav,” has stood as a stunning example of Indo-Islamic architecture but also bears the scars of its tragic history. In homage to the ancient Indians, this Vav (Gujarati variant of a stepwell) has been built. People in mediaeval India relied on this sophisticated reservoir for their consumptive water use as a long-term solution to their year-round water deficit. 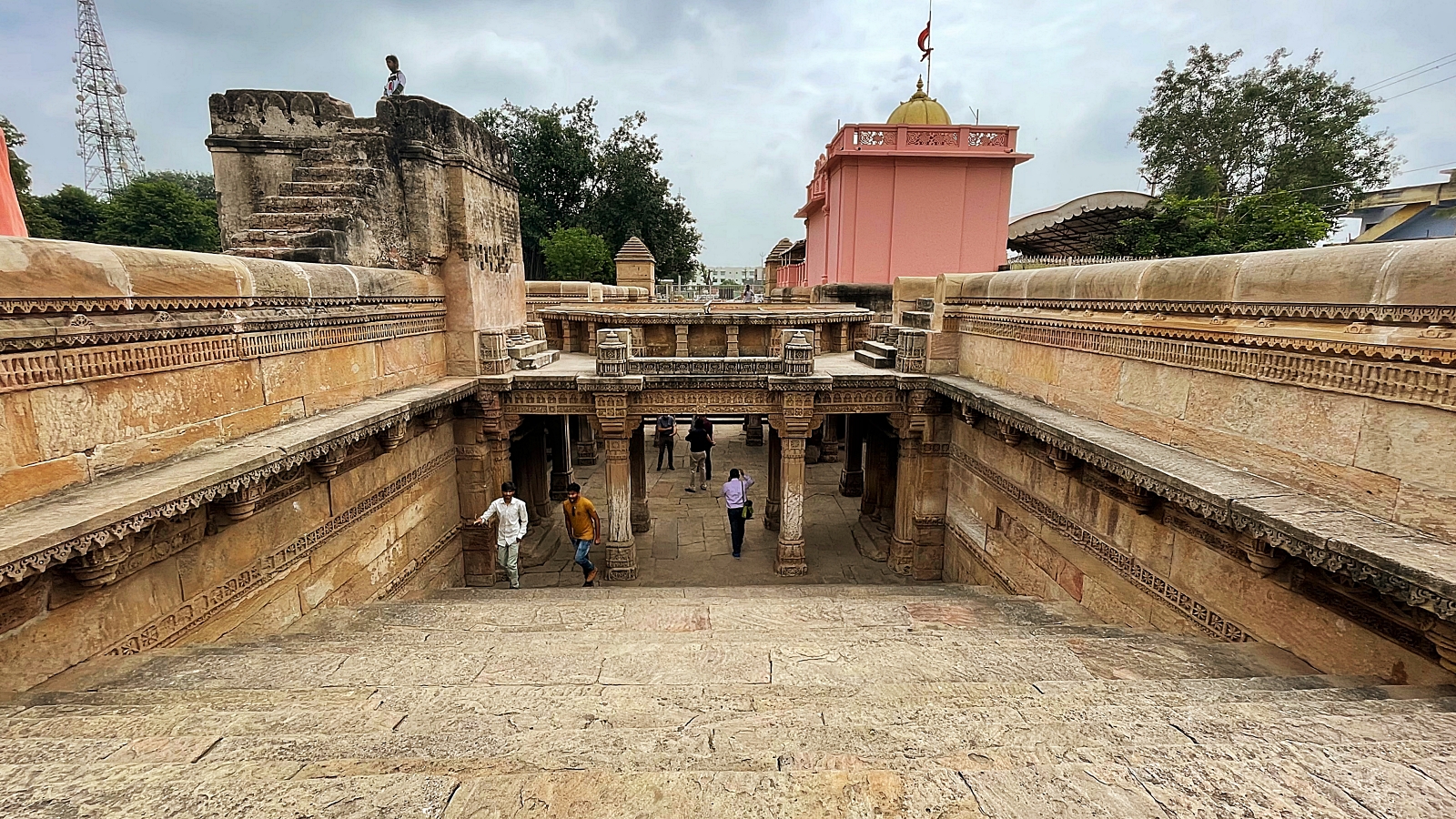 There are only a few arches and corridors left from the original building, which gives little indication of what lies beneath. I could see the arches in the background and the octagonal plan blooming with finely carved pillars as I stood at the entrance of the five levels descending into the Solanki architectural style in sandstone. This Vav, which is surrounded by lofty walls painted with prominent carvings of Indo-Islamic architecture, features flower themes, women churning buttermilk, Hindu gods, dancers, musicians, and Islamic symbols that could very well be attributed to Sultan Mahmud Begada, who erected it.

The Kalp Vriksha (Tree of Life) and Ami Khumbor (Water of Life), both carved from a single block of stone, are two of the most remarkable images that drew my eye. The Adalaj Stepwell’s main entrance may be accessed from the south, while two more staircases go to the Well’s northern side. 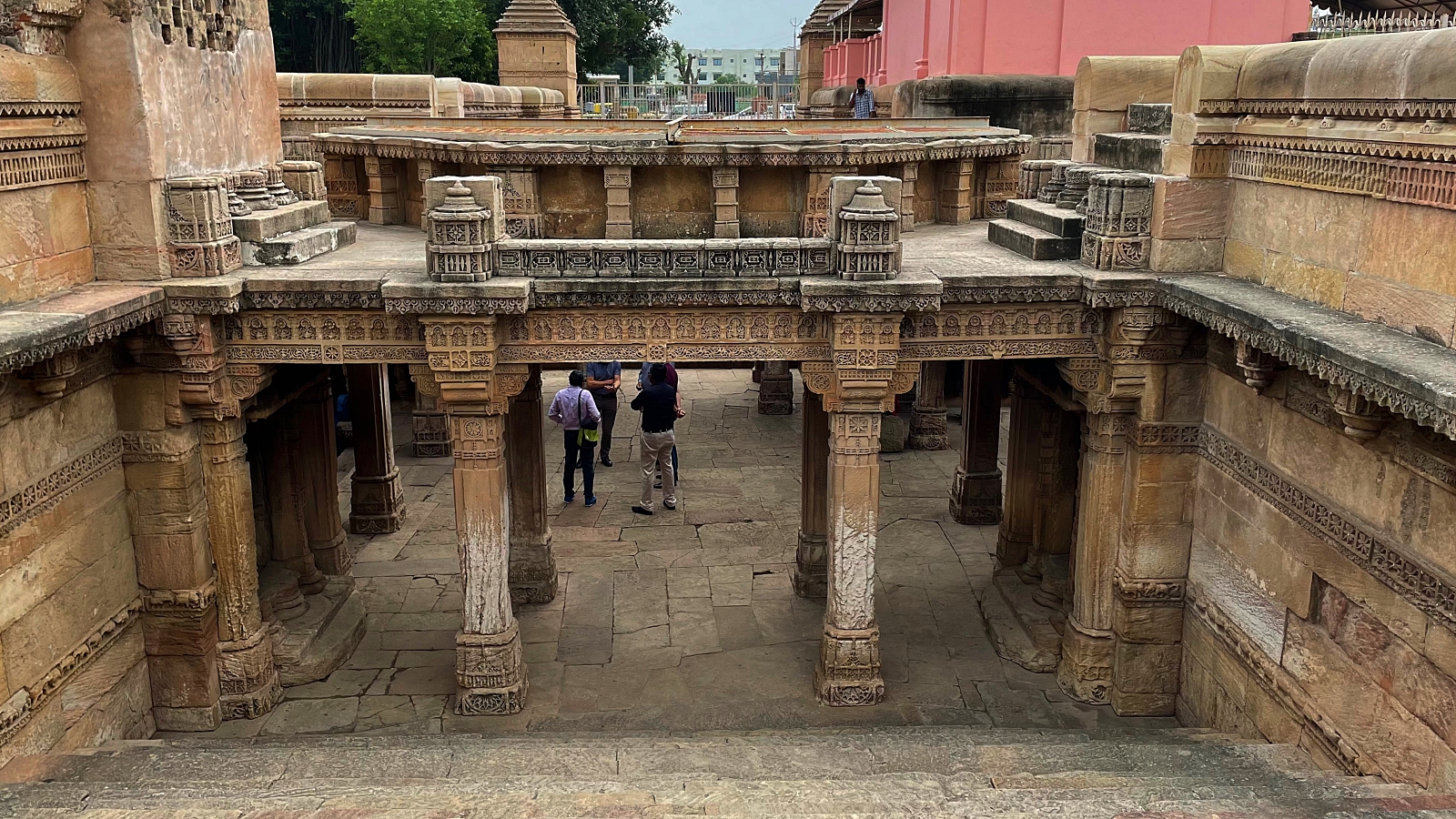 The first thing you’ll notice when you enter Adalaj Ni Vav is the four little chambers on either side of the entrance with oriel windows and etched brackets. Some horizontal beams and lintels extend to the lowest level of the Indianized construction. A well-carved round Vav, however, has a vertically open top section. Due to the open ceilings of the octagonal Well, direct sunlight only reaches the steps at noon. 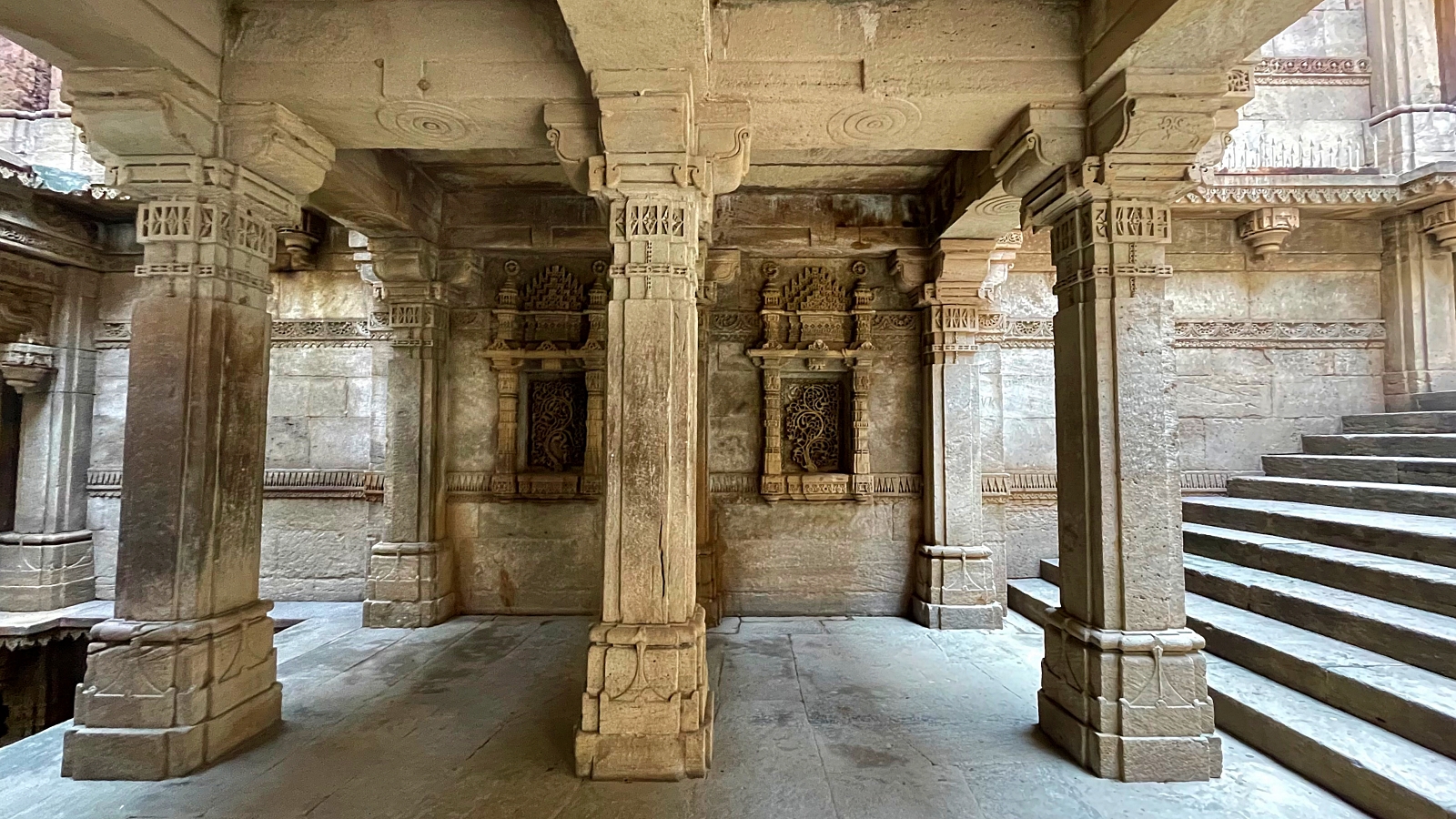 The Adalaj Stepwell’s main entrance may be accessed from the south, while two more staircases go to the Well’s northern side. Stone beams installed at a 45-degree angle reinforce each of the four corners of the floor. 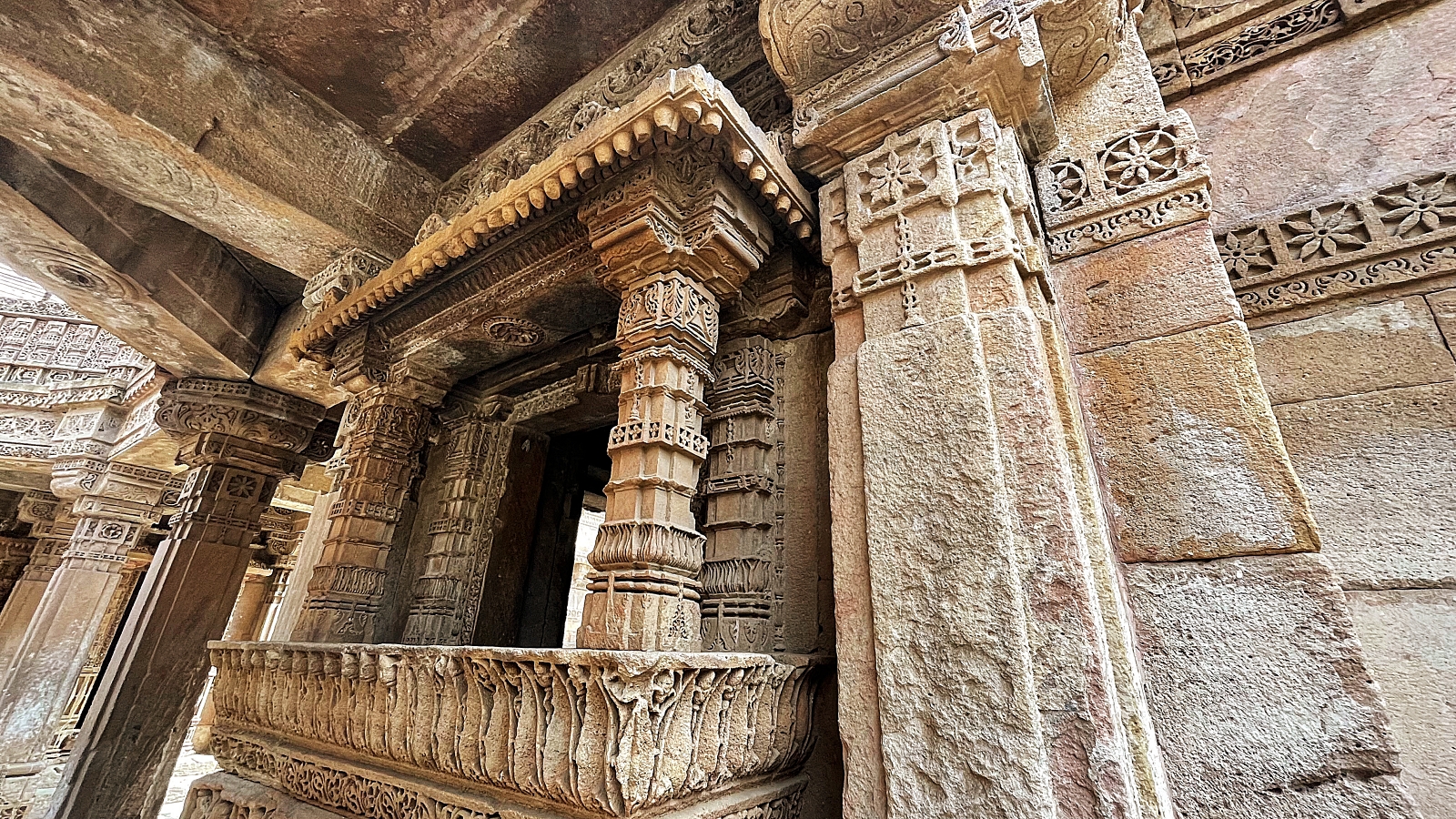 The exquisite carvings on the pillars are mostly intact. Also, I couldn’t ignore the allure of the nine planets (Navagraha) painting, thought to have attracted locals for ritualistic worship during various occasions. 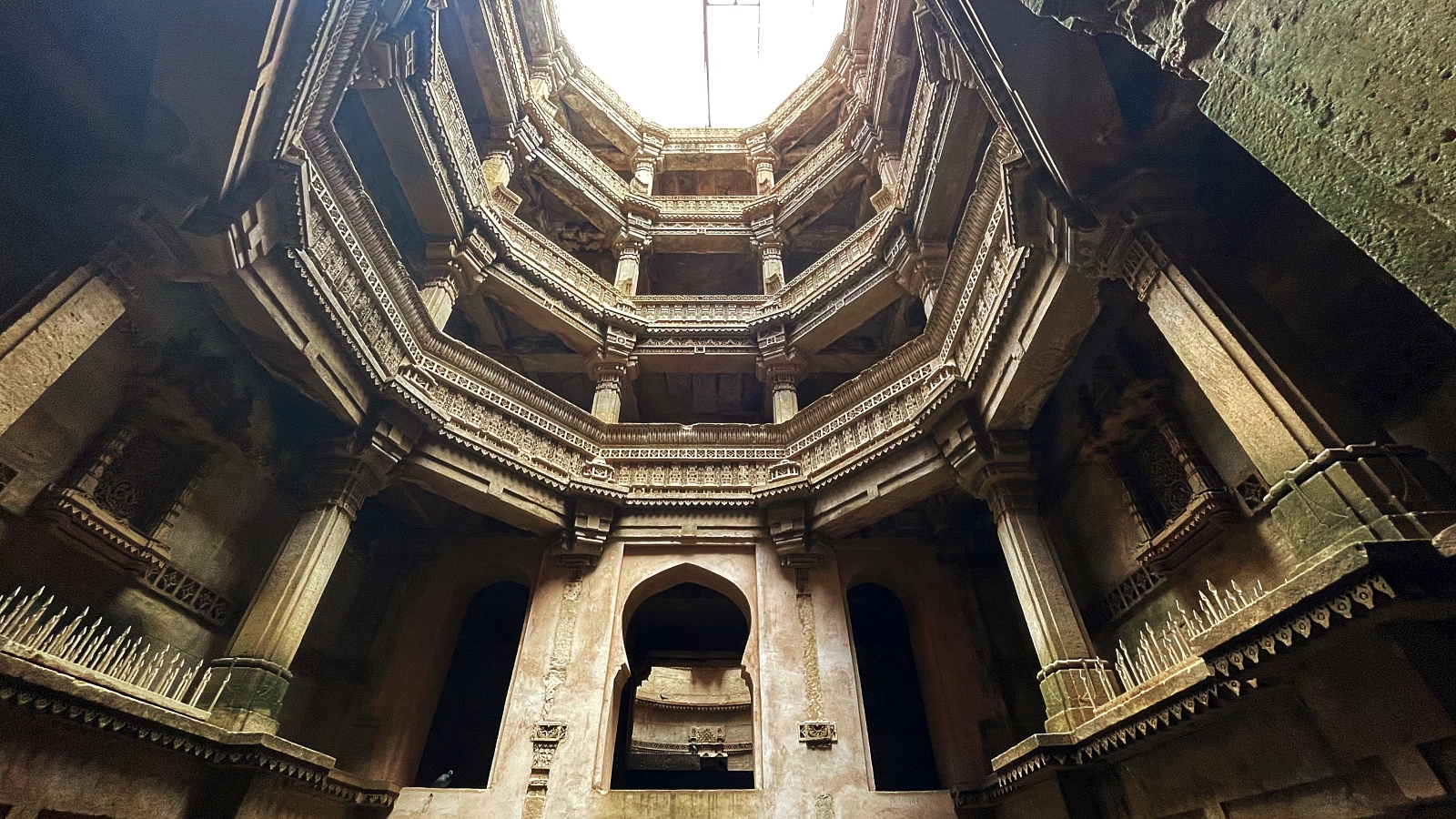 The monument is said to be protected by Navagraha from adverse omens. A conversation with a local guide revealed that Adalaj was once a popular stopover since it is five degrees cooler on the interior than its hot exteriors. 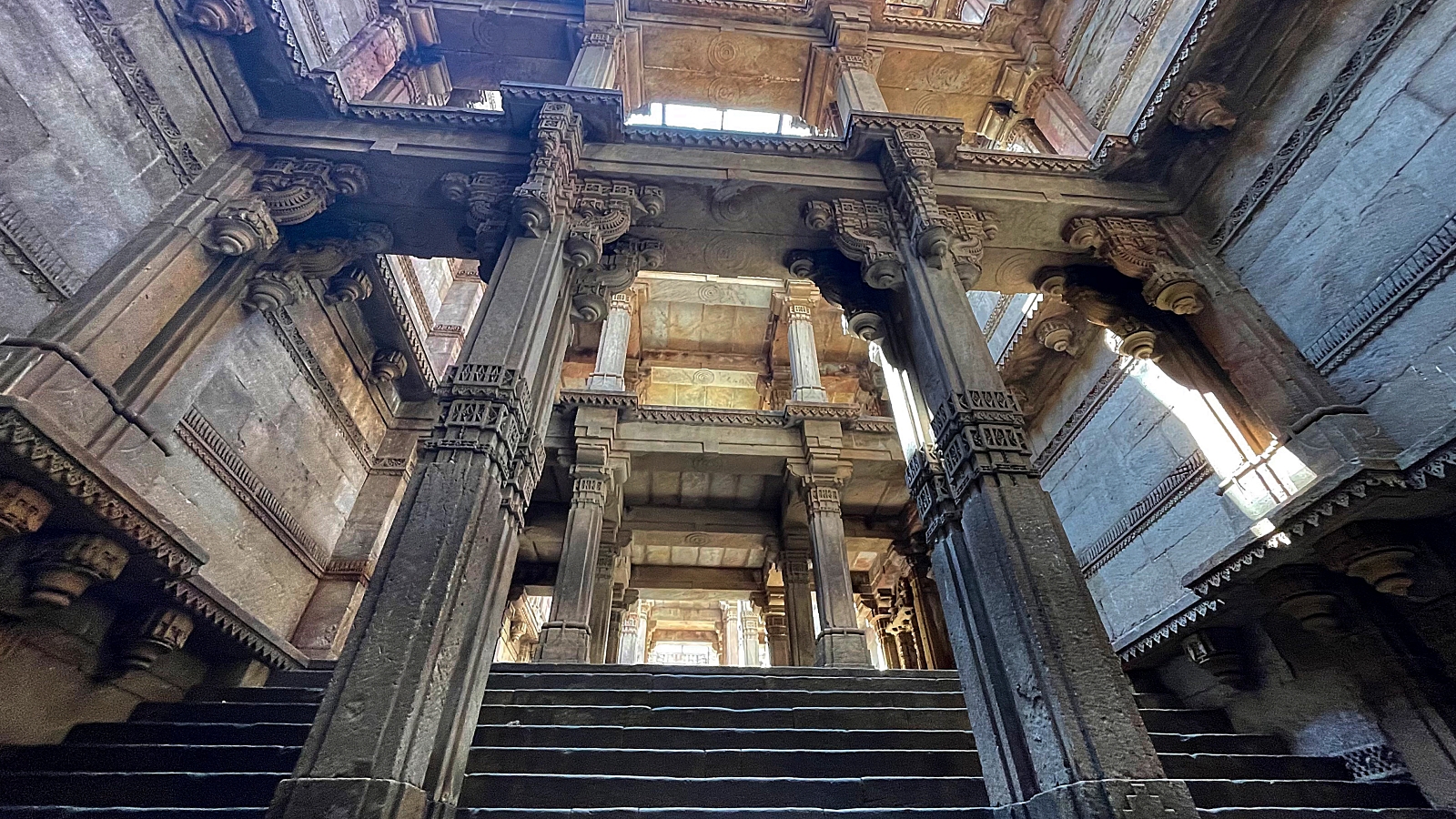 There is a belief that Navagraha protects the monument from bad omens. A word with the local guide unveiled how in the past, Adalaj was a frequented stopover, as, on the inside, it’s five degrees cooler than its pressing exteriors. 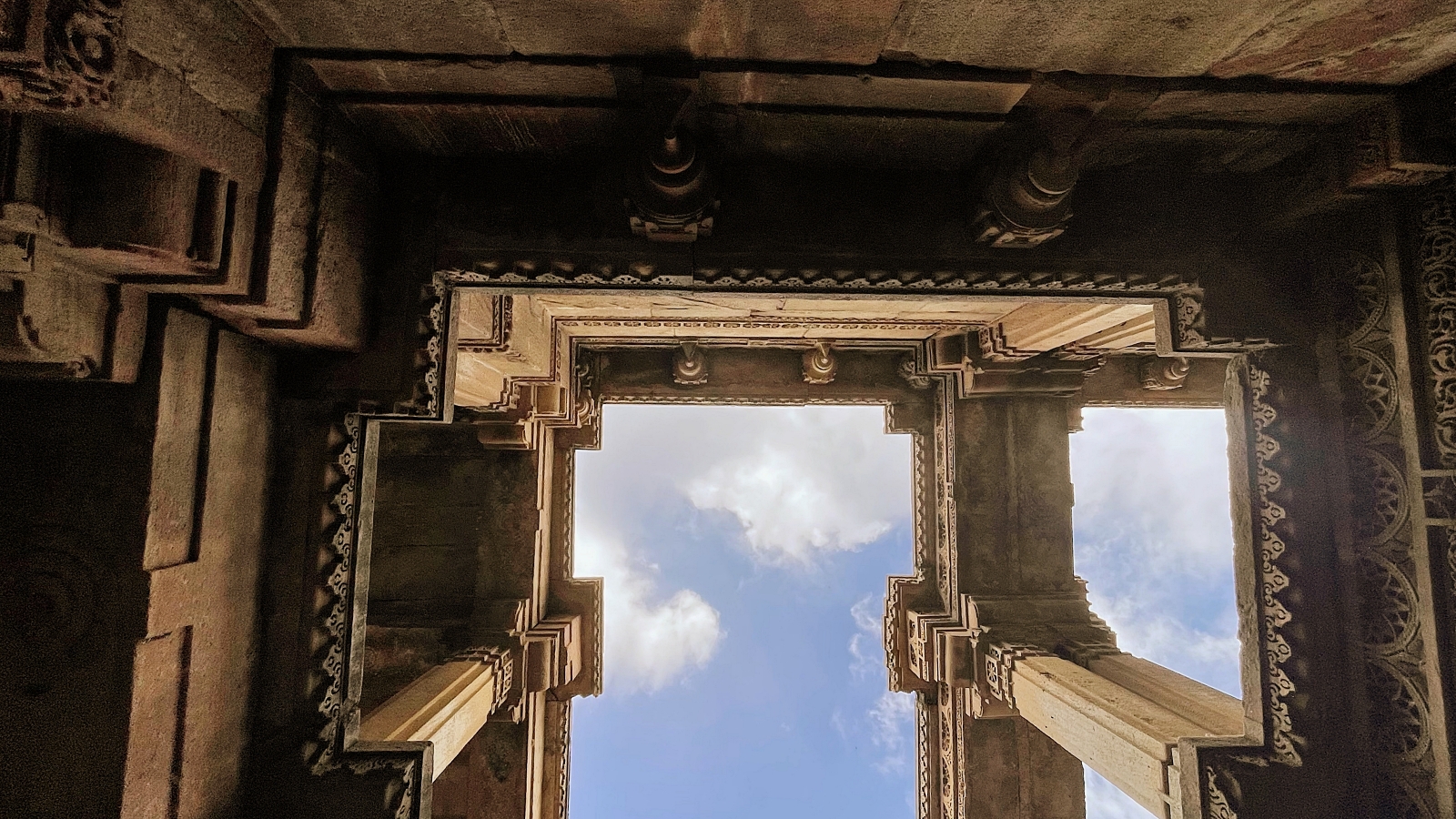 Women collected water for a long time, and also telltale, and devote more time to worship the deities only to enjoy the relatively cooler temperatures on the inside. Adalaj Ni Vav’s core structure is ornamented with symmetrical arches, massive pillars, and ornate carvings that create a sense of mystery and drama. While the earliest traces of Indian Vav can be found as far back as 600 CE, the most enduring examples date from the ninth century onwards. 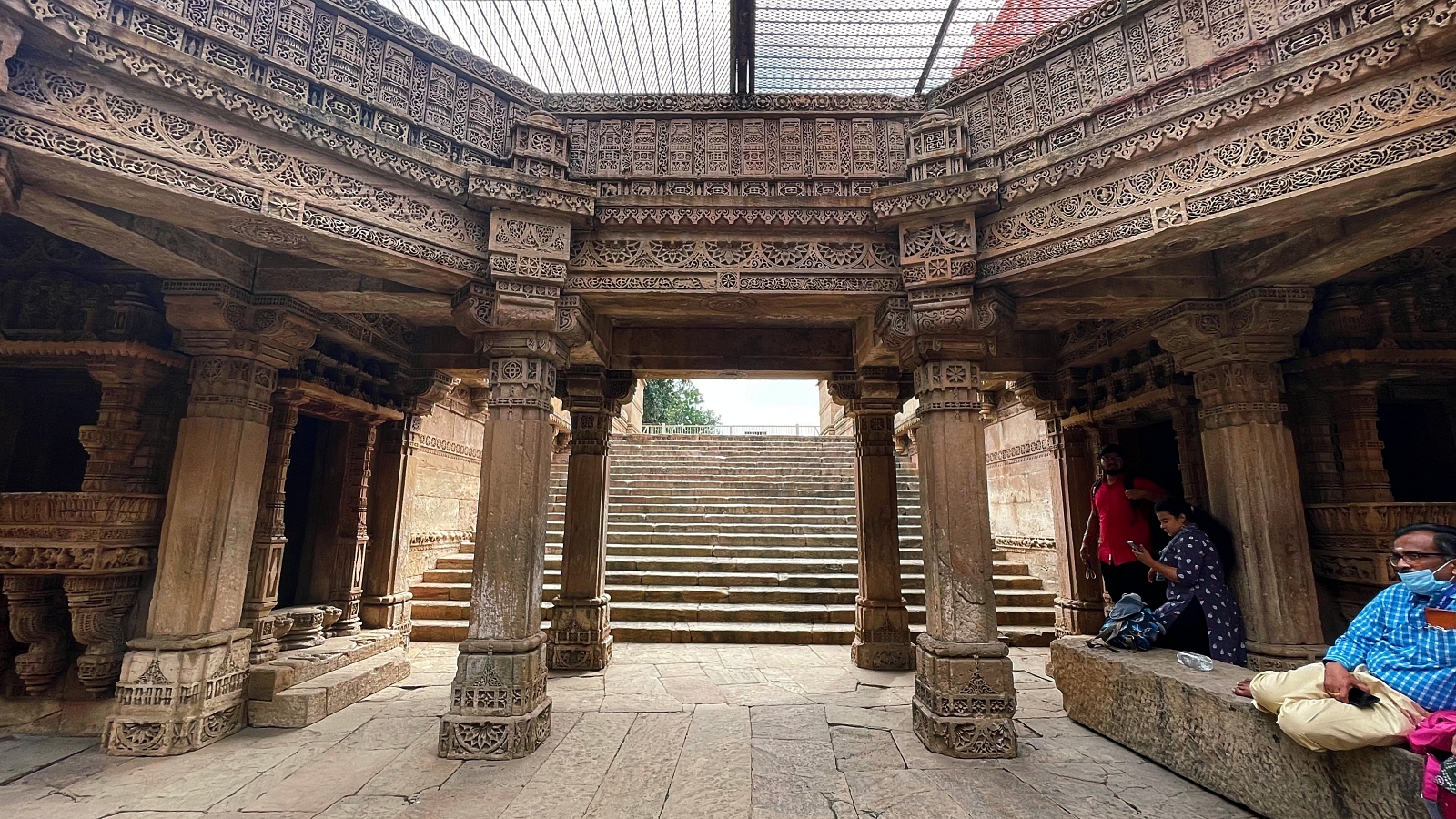 For Rani Rudabai, the imperial wife, Raja Veer Singh from the Vaghela Dynasty, started building Adalaj in 1499, finished in the same year by King Mohammed Begada. There are numerous ways in which this Vav illustrates Hindu and Islamic architecture through its aesthetic and architectural designs. This building was finished after Rani Rudabai’s husband, Rana Veer Singh, lost his life during the war. The history of the Adalaj Stepwell is depicted in a first-floor recess on a marble slab at the well’s eastern entry, etched in Sanskrit. 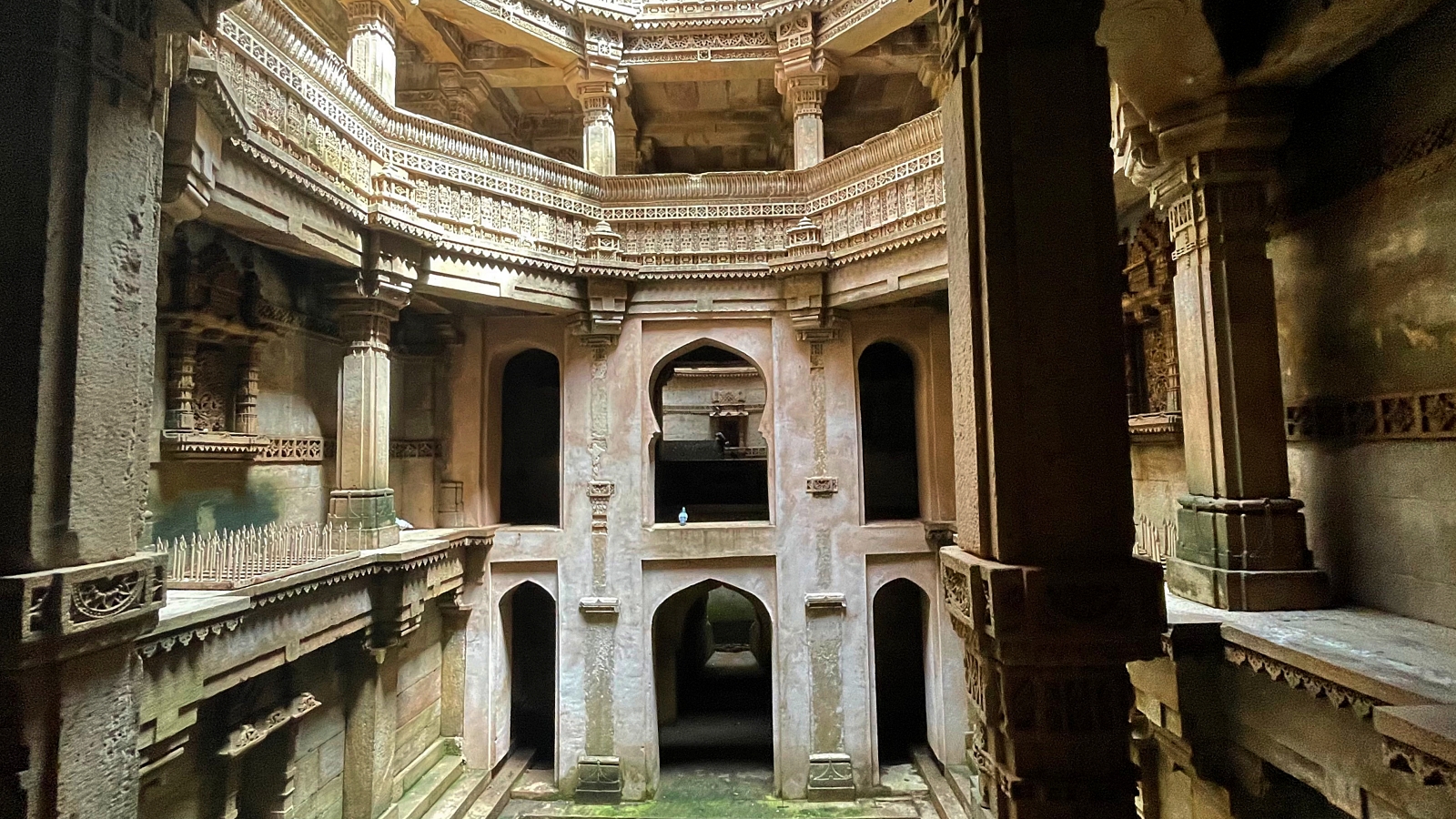 The inscription in Sanskrit explains, “In Samvat 1555 (1498 AD), Mahmud Padshah was the monarch, and King Mokala idolised Ganesha (Vinayaka) to whom he was devoted. The births of Karna, his son Mularaja, his grandchild Mahipa, and his great-grandchildren Virsinh and Naisha are depicted in further detail in the portrayals. This Stepwell was created by Virsinh’s wife, Rooda.” Finally, the summation has a few words of gratitude for the queen and a repetition of the date.

But The Tragic Tale

As we walked across the stepwell, my guide told me about the terrible advents of the stepwell. Here, I learned that in the 15th century, Rana Veer Singh, the ruler of this little empire, chose to construct a stepwell to alleviate the suffering of his people due to a lack of water. However, before the structure could be completed, Mohammed Begda, the Muslim ruler of the neighbouring dominion, raided the land, killing King Rana. The kingdom was then acquired by Mohammed Begda. 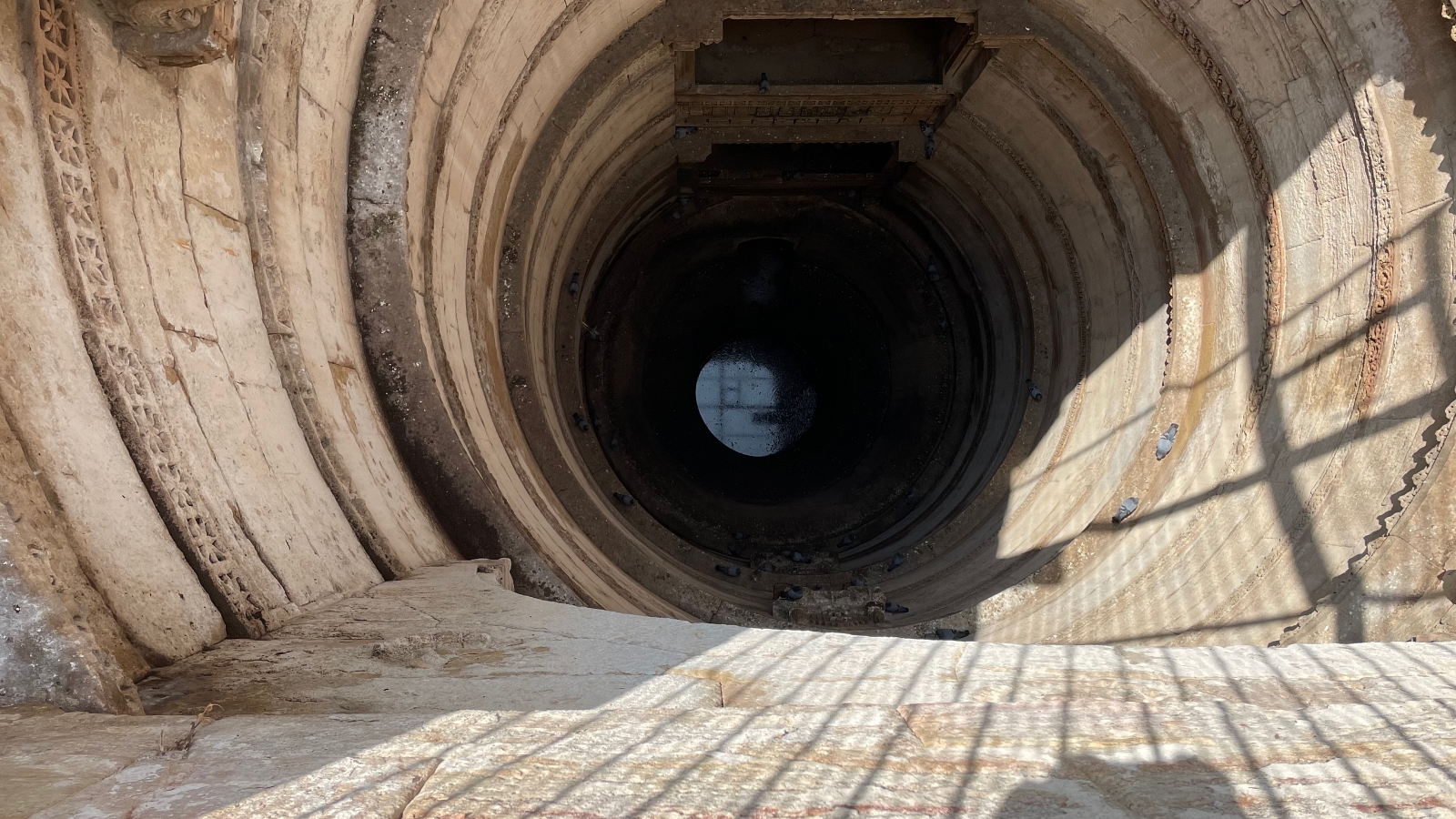 Even though Rani Roodabai, Rana Veer Singh’s lovely widow, wanted to fling herself on her husband’s funeral pyre, Begada forbade her and instead proposed to her for marriage. Rani Roodabai agreed to marry Mohammed Begda on the condition that he will complete the stepwell construction in record time. He complied. The queen, however, broke her word and took her life by plunging into the well after it was completed. 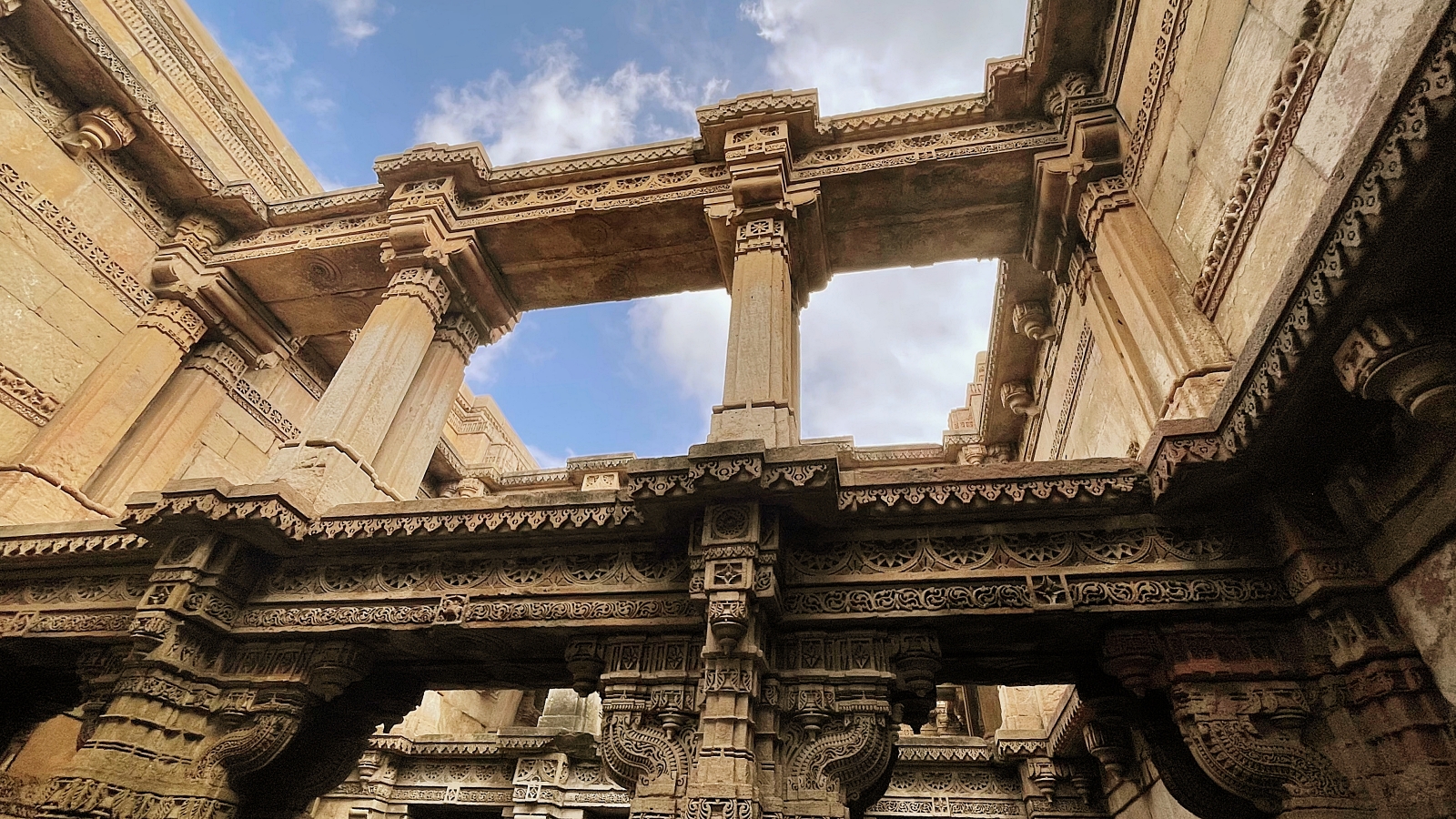 The Swaminarayan sect’s 200-year-old scriptures also suggest that, before committing suicide, Rani Roopba beseeched saints to bathe in this stepwell to purify the waters.

Tombs Behind the Stepwell

According to legend, the burials beside the stepwell are those of the six masons who pitched it. Mohammed Begda asked these masons if a similar stepwell might be made, akin to the Taj Mahal narrative. King Begda sentenced them to death as they agreed since he did not want a replica of this five-story architectural masterpiece. It’s heartbreaking that such beautiful architecture should come to such a horrible conclusion. The finely carved decorations, on the other hand, come into relief in current times, because we spectators have so much to enjoy from what has been left behind. 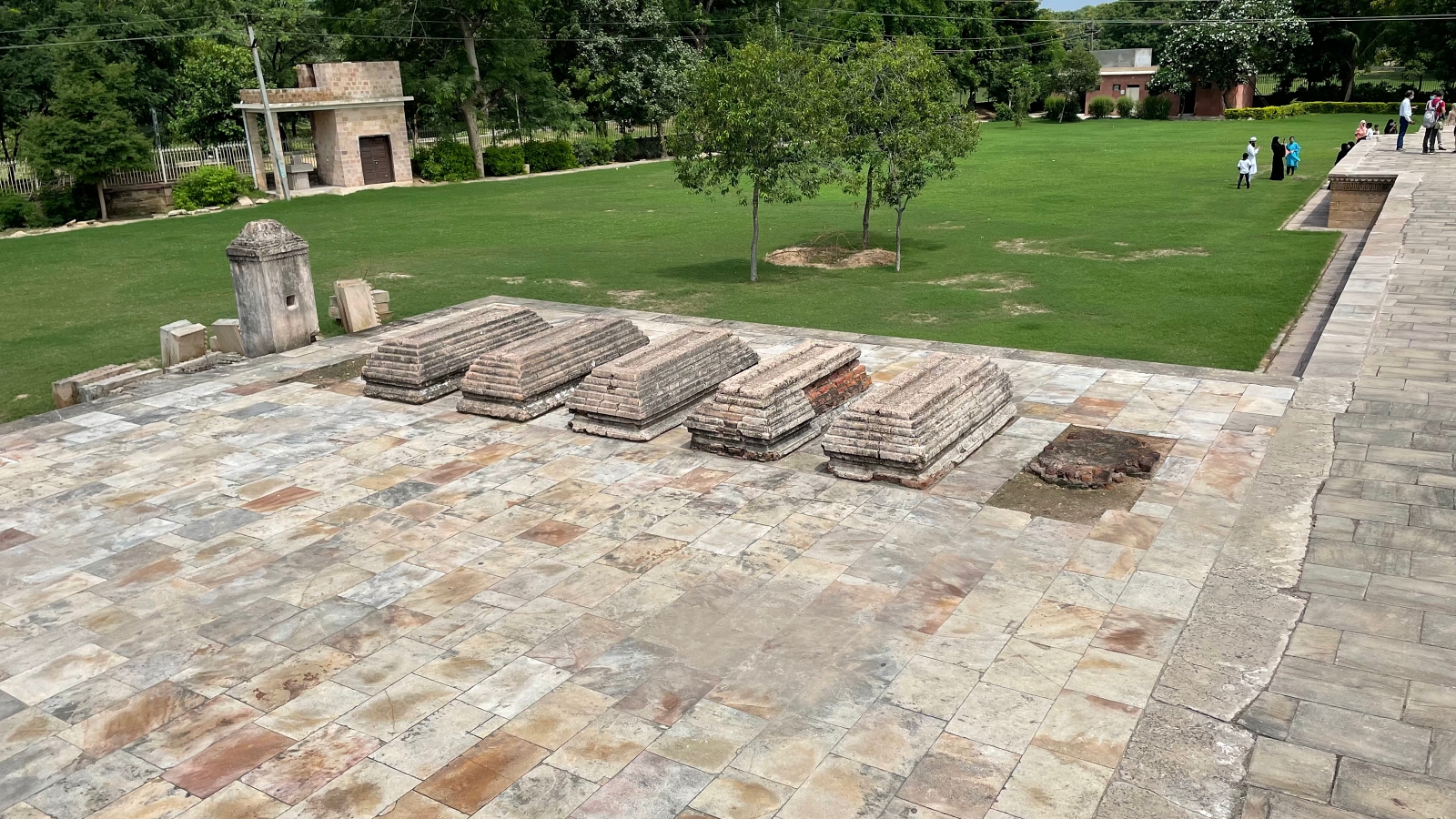 The five storeys are all generously sized, and the step-well has been dug to a depth sufficient to hold the years’ worth of rainfall. It is deemed that these three stairways were one-of-a-kind during the period in which they were built. Also, the ceiling of the stepwell features big air and light vents on various floors, as well as wide holes at the entrance level. Let’s fast forward to now when people’s focus has changed to the cultural heritage’s dynamic urbanscape and visual connectedness. 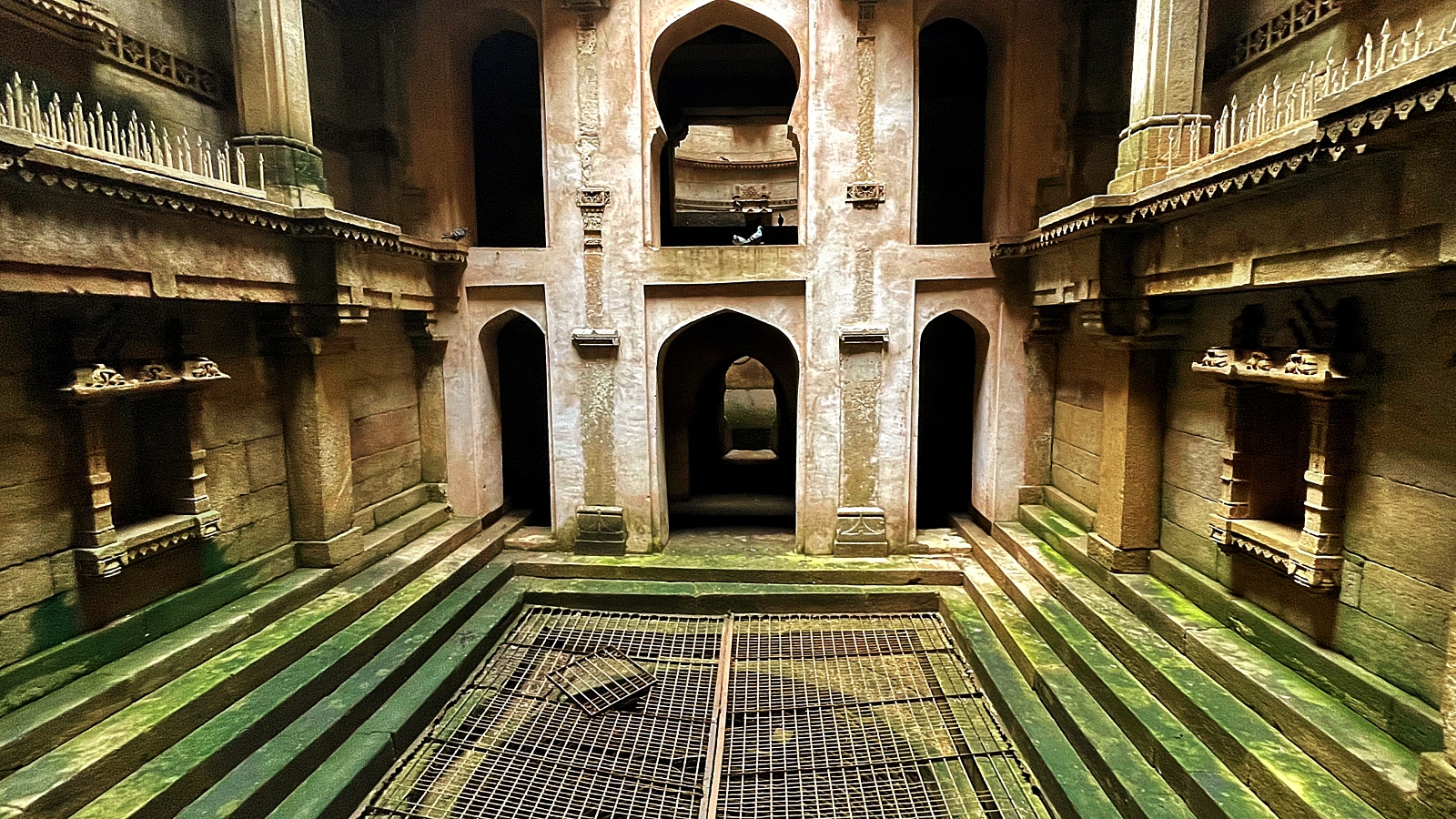 Back when water was difficult to come by and store in Gujarat, this stepwell served as a substantial community structure. Adalaj Ni Vav is one of Gujarat’s 200 remaining stepwells that has endured the test of time and now serves as a portal to a bygone period. Many others have simply crumbled into ruins or phased out due to unsanitary conditions. The architect’s keen awareness of the region’s soil and earthquake characteristics is assumed to be the reason for Adalaj Ni Vav’s longevity.