DESTINATIONS Madrid Royal Palace: An Adventure Fit For A King

It is not only, the office of the Spanish Royal Family, but also the largest palace in Spain and the whole of Europe. Madrid Royal Palace or as it’s called in Spanish, the Palacio Real – is used seldom by the royal family for royal ceremonies and official banquets, as they moved in Palacio De La Zarzuela years ago. Located downtown Madrid, on Bailén Street, Palacio Real dates back to the 9th-century and is believed, to have been built, on the same site as of the Alcázar, a Muslim fortress. After Alcázar was ravaged by fire on the 1734 Christmas, Felipe V, a Bourbon king took to constructing a palace on the same site, conceptualising it to dwarf each one of its European equivalents. 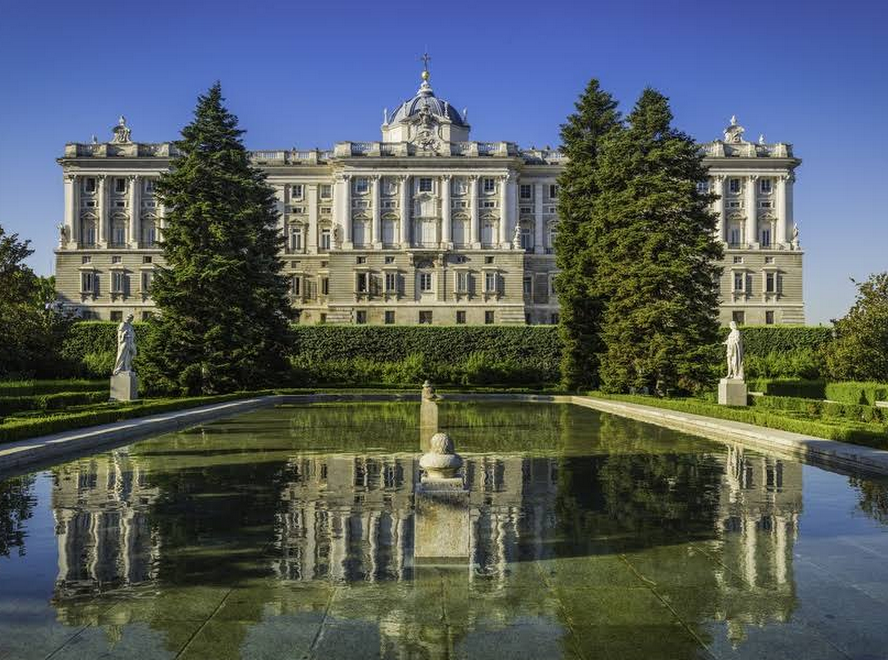 Felipe planned the entire construction to be vaulted in stone and brick so that fire couldn’t destroy it again. However, he died before the palace was completed, which is why this baroque leviathan has only 3400 rooms, about 1/4th of the original blueprint. Even with 3.4K rooms, this royal palace is developed, across 135,000 sq. mt. of floor space. Both interiors and exteriors are purposed to sweep you off by their magnanimity. Interiors especially as they hold the timeless paintings and frescoes by Caravaggio, Francisco de Goya, Velázquez, Giovanni Battista Tiepolo, Juan de Flandes, Corrado Giaquinto and Anton Raphael Mengs.

Guided or self-guided tour drives through 50 palace rooms, allowing for a special-sighting of 215 euphuistic clocks, 5 Stradivarius violins and Goyas. The central stairway tenders a splendid statement of royal power, further spanning into Halberdiers’ and the Throne Room. Following which, you will visit one of the most beautiful rooms in the palace, the Salón de Gasparini. The Rococo-style room Gasparini has on display, mesmerising walls decked with silk and gold embroidered silks, the clock over the fireplace, expensive wooden and bronze furniture, marble floor and a majestic Chandelier dangling through a gorgeous stucco ceiling. It’s in this room, where Carlos III arrayed in the presence of the court, as maintained by the inheritance. 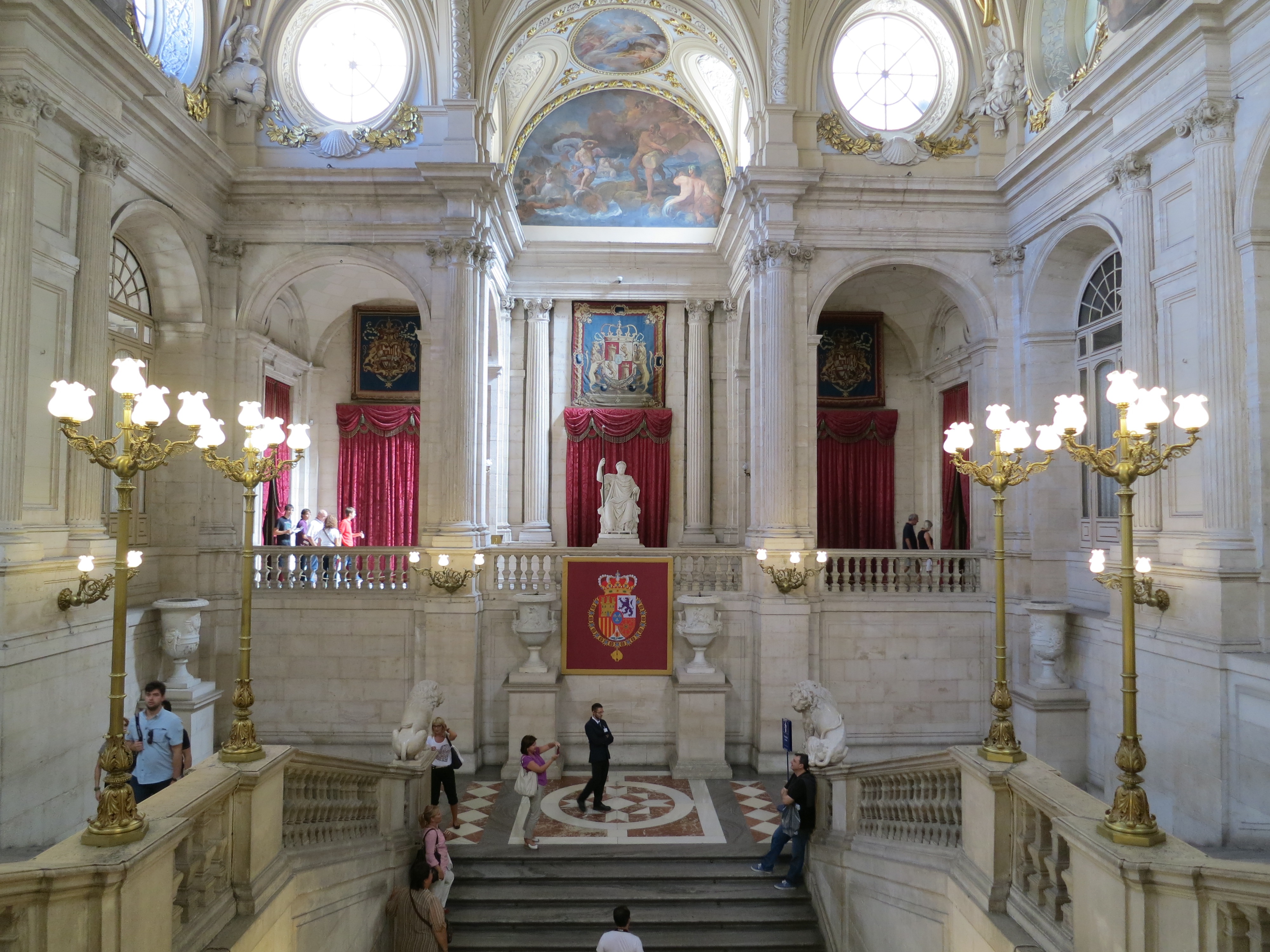 In 1789, Sabatini built the Grand Staircase on request of Charles IV who desired it relocated from its original location. This staircase is cut, from a single section of San Agustin marble with two lions gracing its foundation. The 4-cartouches at each corner represent air, earth, water, and fire. Both ground and upper floor are embellished, with the statue of Charles III.

Dating back to 1772, the Throne Room at the Royal Palace features 18th-century French bronze chandeliers, Tiepolo’s ceiling frescoes, four royal family portraits by Goya and so on. Salón del Trono or the Throne Room is lavishly decorated, with auburn velvet wall fabric, paired with magnificent furnishings and a baroque Tiepolo ceiling. In the Musical Instruments Room, take a note of the ceiling fresco designed by Francisco Bayeu. This ceiling depicts providence and fortes of people.

The Gasparini Room or Salón de Gasparini features walls festooned-in gold and silver embroidered silks and an impeccable stucco ceiling. Wherein the aesthetics of the Porcelain Room or Sala de Porcelana, display improvidence through endless porcelain pieces screwed into the walls in the remembrance of the Retiro porcelain factory.

Plaza of the Armoury

The Plaza de la Armería or the Plaza of the Armoury sets the absolute order of the palace into outlook. It’s from here that Madrid’s dramatic ‘changing of the guard ceremony’ operates between the palace and the Catedral de Nuestra Señora de la Almudena on the 1st-Wednesday of each month. A simplistic version of the same ceremony takes place at Puerta del Príncipe inside the palace compound every Wednesday between 11 AM to 2 PM. While here, also take a look at Armería Real, a repository of 16th and 17th-century weaponry and armour suits. Madrid’s Royal Armoury, they say, is one of the best in the world. This armoury is home to tournament pieces made for Charles V and Philip II by prominent armourers of Augsburg and Milan and other items from as early as the thirteenth century.

The Royal Pharmacy emerged during the reign of Philip II as an appendix to manage the supply of medicines. Here you will find the 18th and 19th-century collection of Talavera and La Granja de San Ildefonso earthenware. At the Farmacia Real, you will also discover an imposing collection of medicinal jars that were applied to process royal concoctions.

The capacious Gala Dining Room or Comedor de Gala is where splendid ceremonial events, are held. This stately room is magnified, by antique artworks, ornate chandeliers and profusely rich archway. 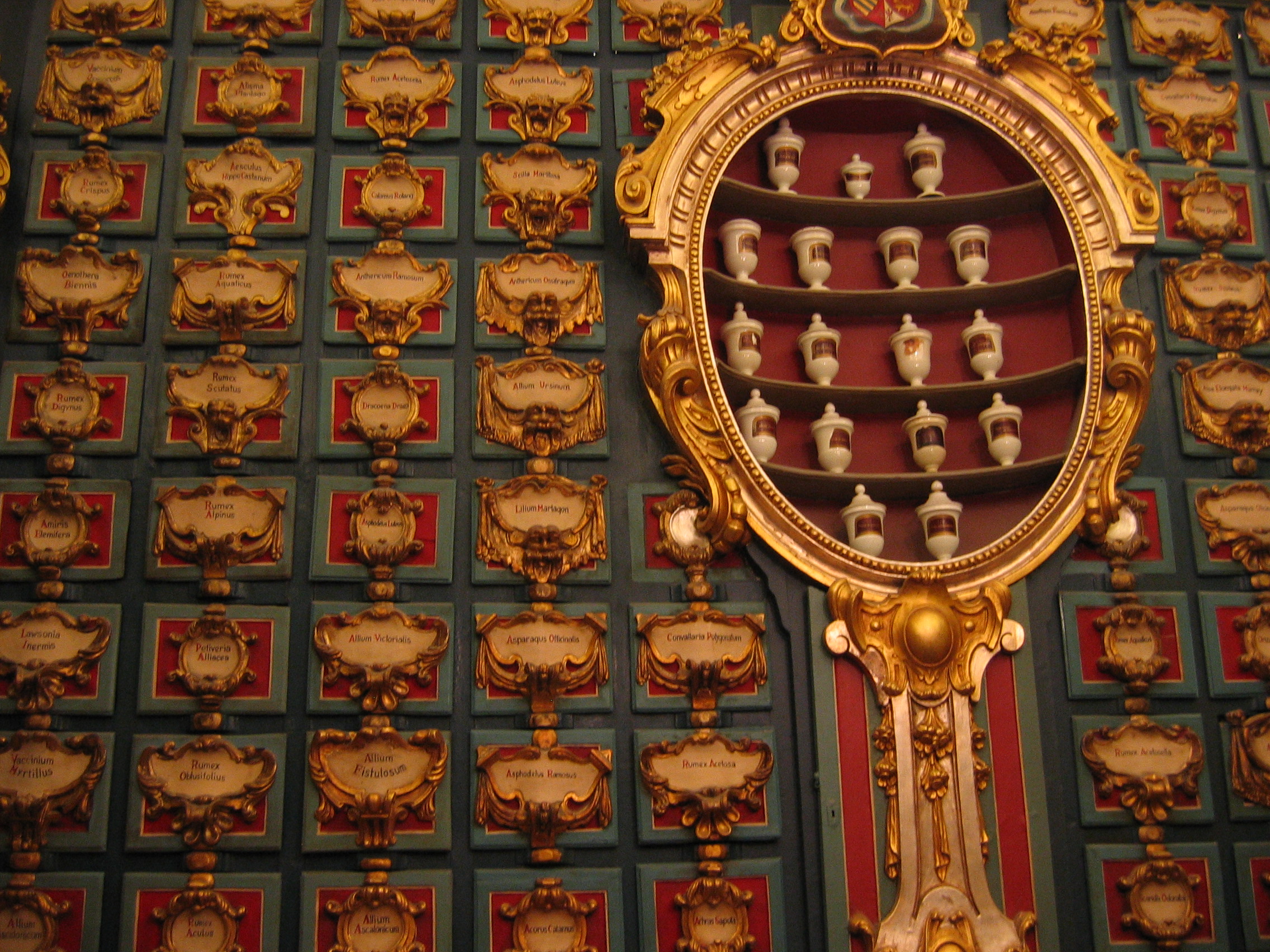 In the Royal Library of the Madrid royal palace, you will find a personal collection of books from the period of Alfonso XII, Charles III and Isabel II. While the book covers illustrate Rococo binding styles in gold adorned with lace; the bookshelves feature writings of gothic, poetic, neoclassical and renaissance themes. The Royal book collection comprises of the Bible devoted to Ferdinand VI by Farinelli, the codex of the time and the Book of hours and an archive of the Royal Palace carrying 20,000 articles. Apart from fascinating reads, the Royal Library also hosts a collection of royal medals and maps.

Jardines de Sabatini is a French-inspired garden that was built in the 1930s to succeed the royal stables on the site. These symmetrical gardens are embellished small labyrinths, fountains and excellent views of the palace’s northerly facade. Named after Francesco Sabatini, who had designed the royal stables that earlier occupied this site, the Sabatini gardens stretch to Cuesta de San Vicente and Calle de Bailén and observes a well-formed French design. Sabatini gardens star a comprehensive rectangular pond girded by statues of Spanish kings and beautiful fountains. Campo del Moro transpired when King Philip IV built fountains and planted seedlings and bulbs in the palace.

Also on the city tour bus route, this majestic Royal Palace is indeed one of the most immeasurable landmarks in Madrid covering many of Spain’s timeless treasures. From artistic architecture to grand staterooms to enchanting gardens; the magnanimity of the Royal Palace of Madrid will sweep you off your feet with its glorious altruism.

Entry Fee: €11 (On some special days, there is no entry fee)

4 thoughts on “Madrid Royal Palace: An Adventure Fit For A King”

Any cookies that may not be particularly necessary for the website to function and is used specifically to collect user personal data via analytics, ads, other embedded contents are termed as non-necessary cookies. It is mandatory to procure user consent prior to running these cookies on your website.