In Mauritius, hearing Indian phrases and eating Indian food is a typical etymology. Even though the island is charmed by French culture, it nevertheless has a more prominent Indian impact than Africa. And this, without a doubt, reflects in Mauritius’ cuisine culture as well. While I must agree that Dholl Puri surprised me with its Indian flavours with a twist, it was a lunch at the Labourdonnais Waterfront Hotel that captured my heart in Mauritius. Labourdonnais always has something special going on, or perhaps the ambience was a welcome change from the Indian backdrops. 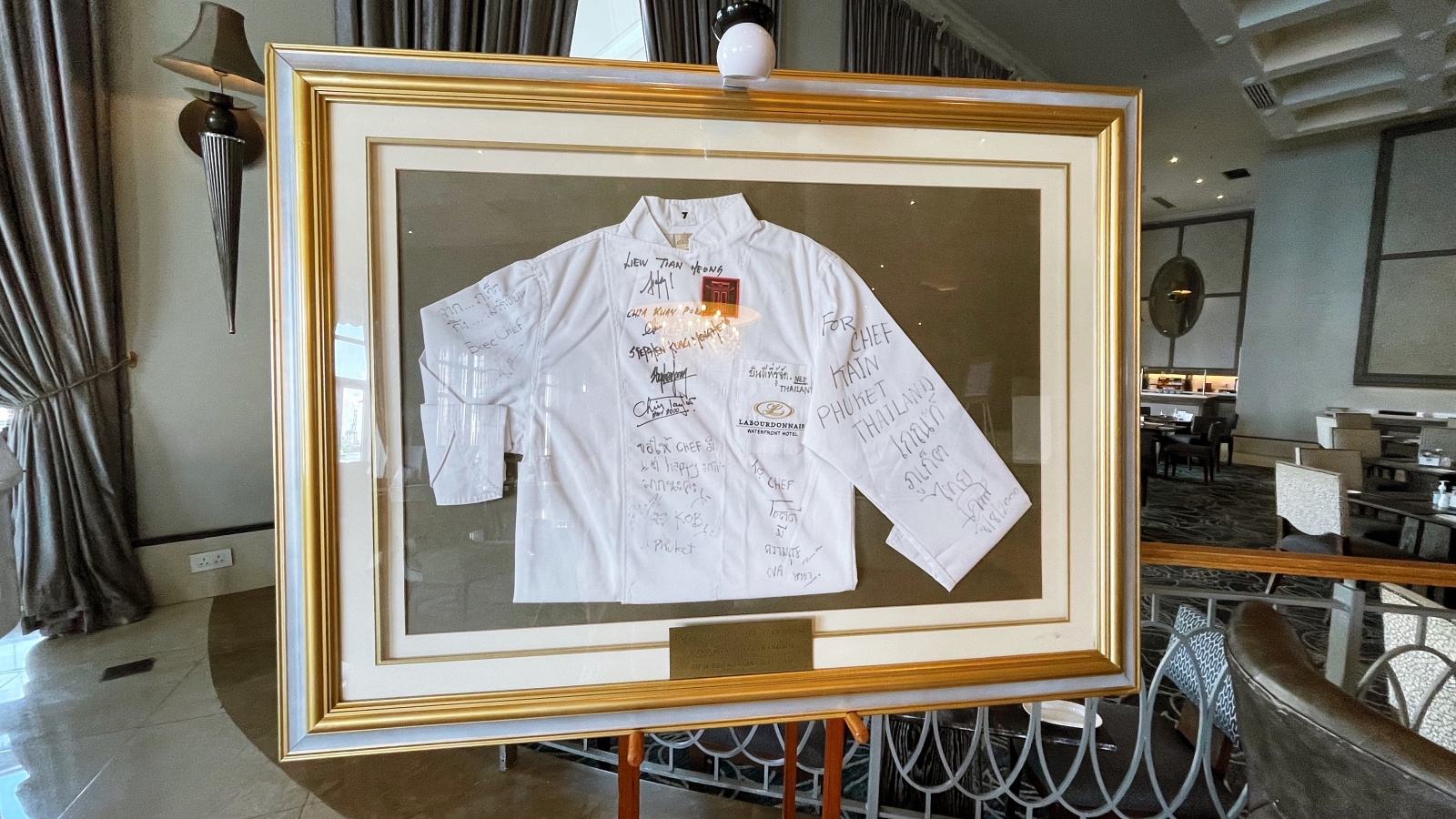 The hotel’s lobby sets the tone for a terrific lunch. The decor next to the entrance includes handwritten testimonials from Michael Douglas, Catherine Zeta-Jones, Atal Bihari Vajpayee, Nelson Mandela, Margaret Thatcher, and Desmond Tutu, as well as chef costumes signed by several notable chefs. Indian celeb, Karthik Aryan, was spotted by the premises. The magnificent chandeliers that dangle above the grey velvet sofa and white seating welcome you into true Mauritian splendour. 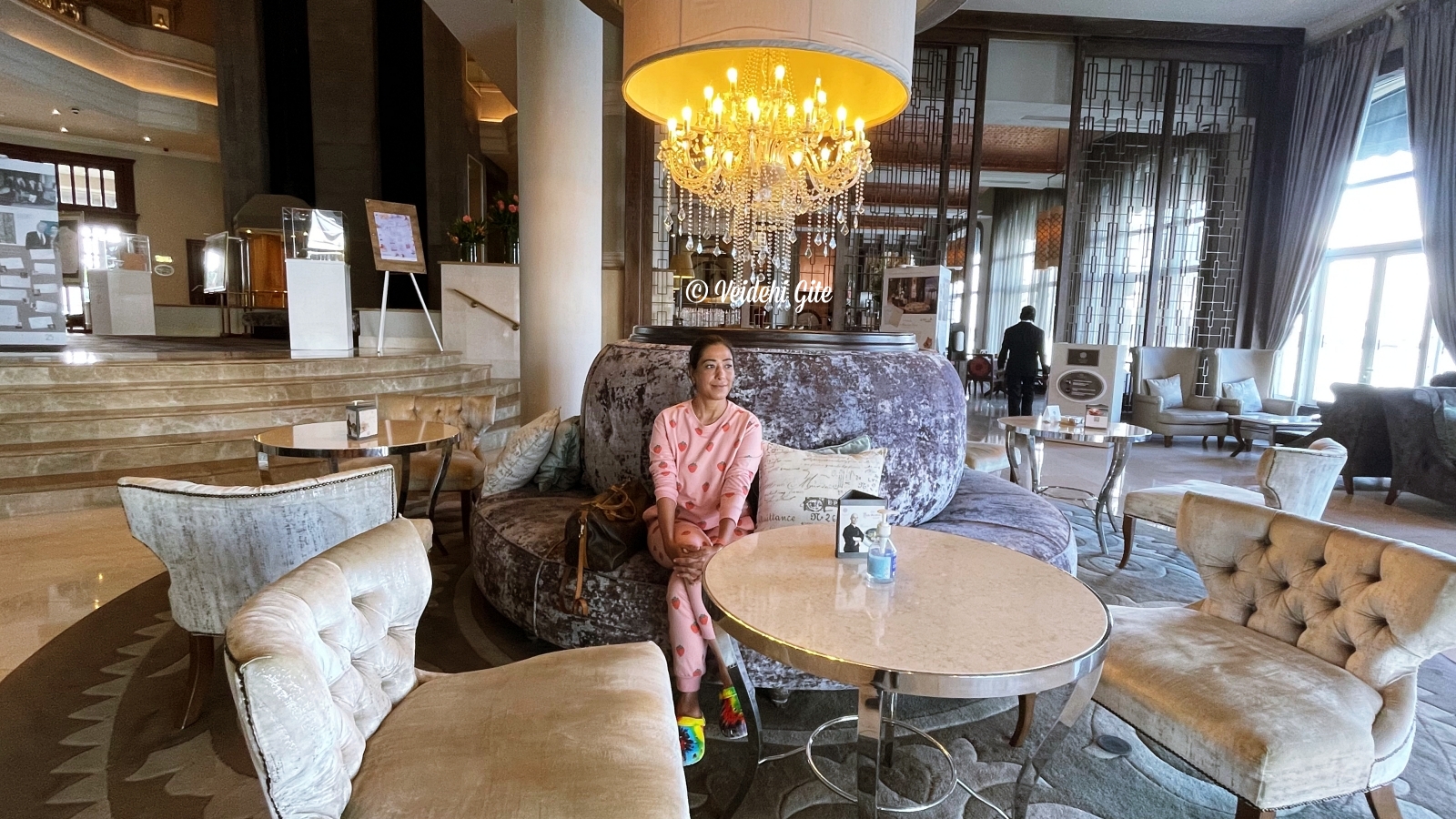 After passing through the massive floor-to-ceiling gate on the right, you’ll find yourself in an open-air Post Box lounge bar with some of Mauritius’ best views. With regards to the entree, a handful of international appetisers were doing the rounds. There were burgers with fries, croutons with olive paste, and even a variety of bread, typical of a traditional French ambience. As for the main course and dessert, I counted on the waitstaff and requested him to bring me anything he’d order from the menu himself, and he didn’t let me down.

Of course, he just asked me one question: “Are you a vegetarian?” “Anything but that,” I said in response.

But, before I could get my hands on the food to commemorate the Labourdonnais’ 25th-anniversary celebrations, I was offered a very impressive cocktail. The waitstaff slickly unveiled this pot drink, and as he raised the glass croche, aromatic smoke drifted across the table, revealing the most beautiful cocktail I’d ever seen. As the name implies, Post Box 96 is a posh drink created specifically for the hotel’s centennial festivities. It’s also reasonably priced at 500 Mauritian Rupee. 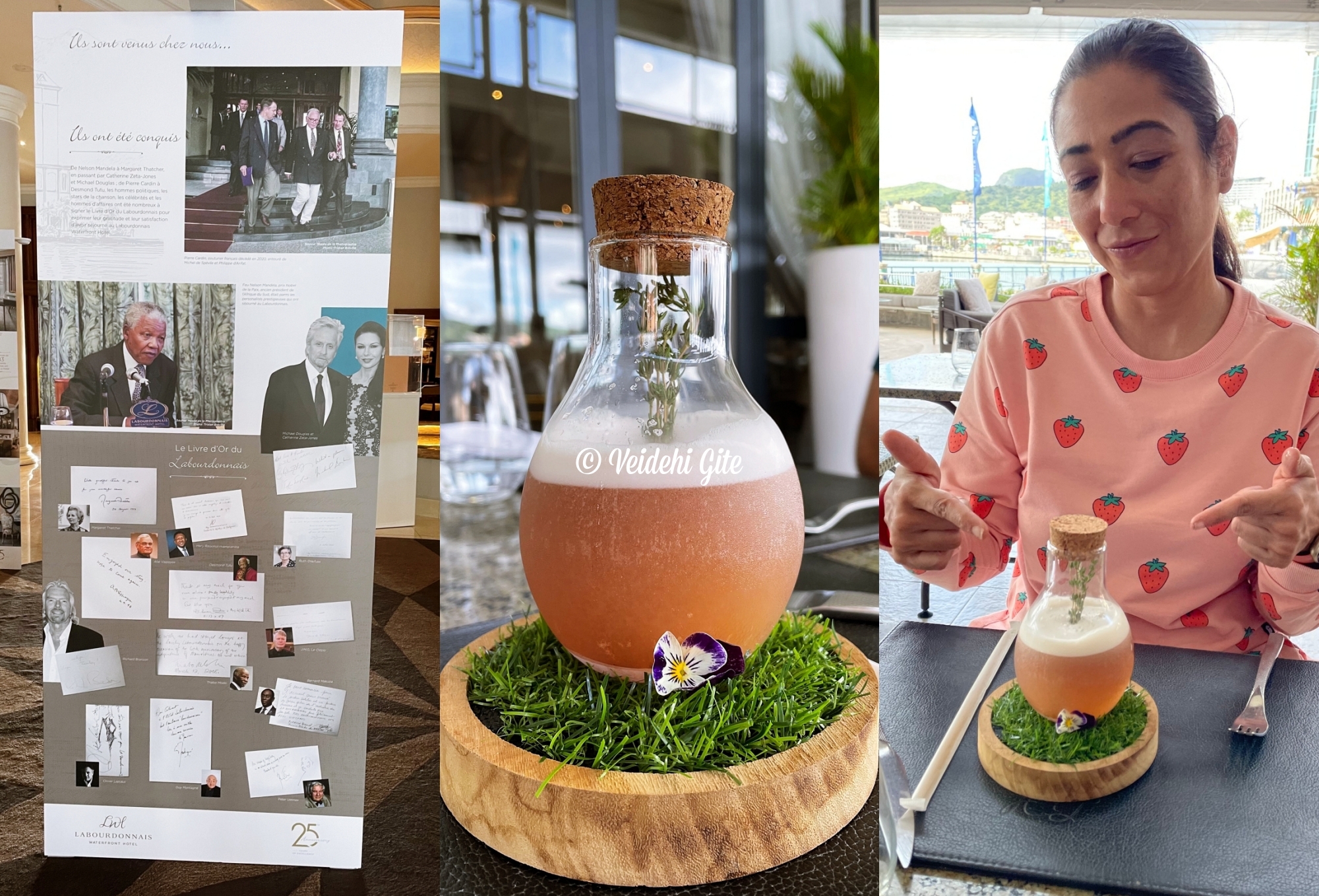 Post Box 96 being the mix of gin, jus de citron, Anis etoile infuse, Dans du brandy, thyme et cassis clarifies, Jus D’ananas, and Blanc D’oeuf make a perfect tropical drink that I highly recommend to everyone. It’s presented in a corked glass bottle with a thyme stick in the centre and an edible violet bloom on the base. The umbrella square’s buildings dominate the waterfront backdrop with their stunning architecture, which begs the issue of their Russian connection. The yachts at the harbour conjure up images of a tropical getaway in an affluent country. 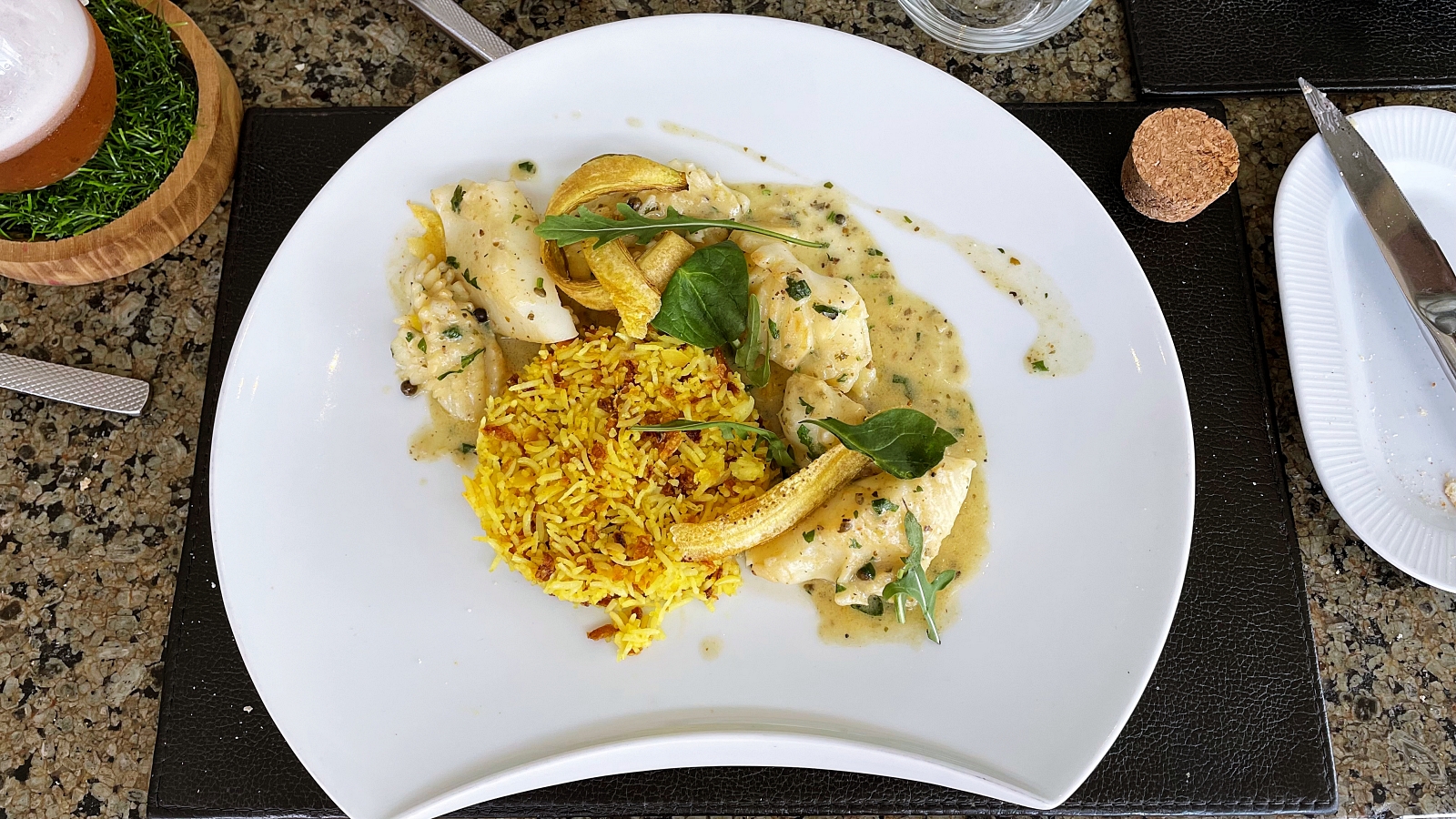 The waitstaff brought me Plats de Resistance for the main course, which consisted of grilled calamari with garlic and green pepper butter served with rice and green banana chips. Calamari was served in generous servings, and large chunks of fish were grilled to perfection. The alchemy of the garlic and green pepper butter, I believe, is what makes this dish so delightfully slip past your mouth. It’s also light on the stomach, which makes it an ideal main dish for the Mauritian climate. The waitstaff’s choice demonstrated how passionate Mauritians are about their seafood. 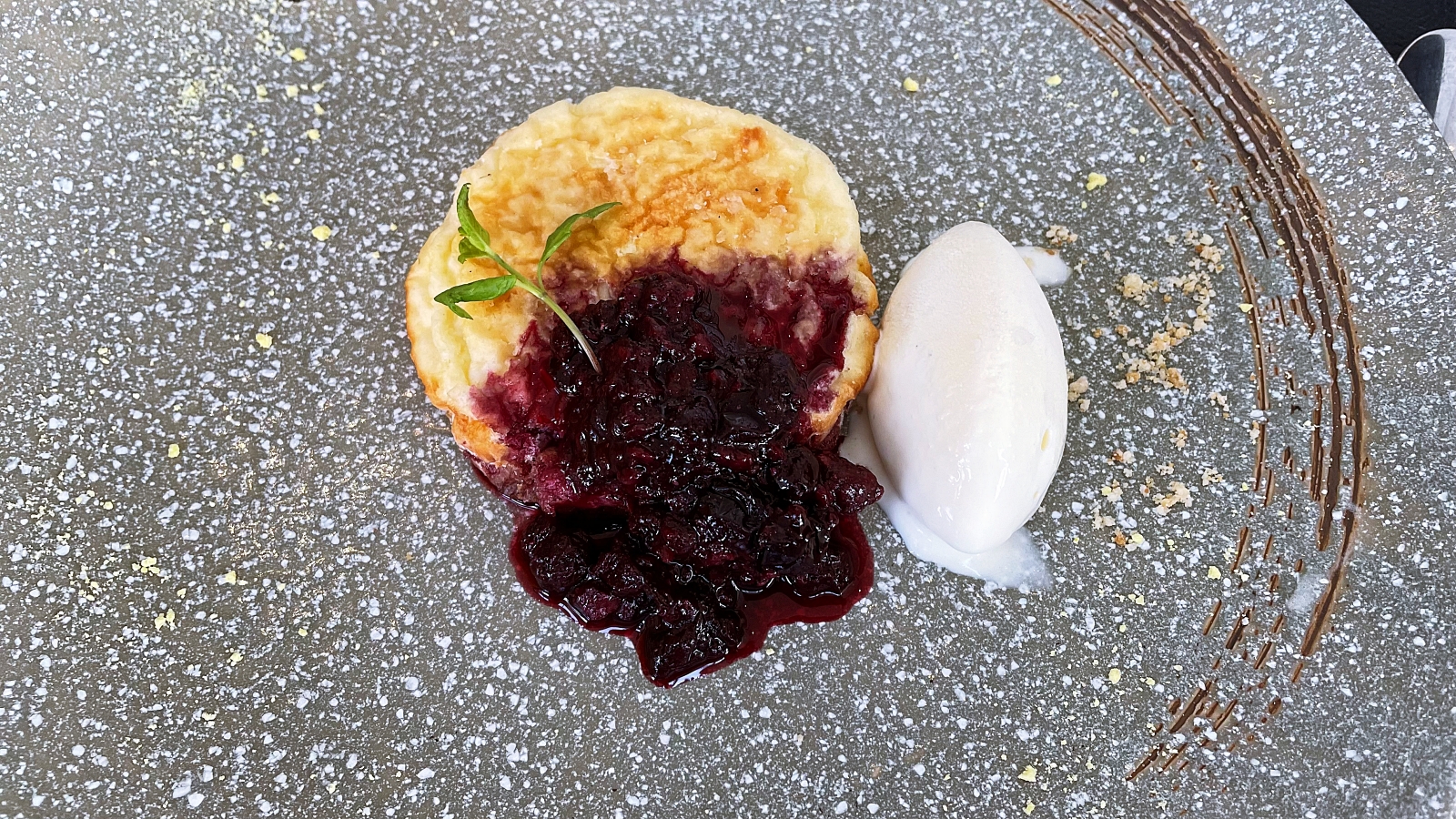 The staff chose a Japanese Pancake for my dessert. Here’s the fun part about letting the waitstaff choose your food: they bring you dishes based on their assumptions about you. While their meal presentation allowed me to appraise them based on the foods they enjoy. Berries, for example, are a highly popular element in Mauritius. My dessert came with a spoonful or two of berries and a scoop of Vanilla ice cream on the side. The trick is to consume it altogether. Take a small slice of pancake, a few berries, and a smidgeon of ice cream on your fork; together, it is a flavour explosion.

Mauritius is known for its sweet and wild foods, and I had a few of them on my plate today at the Labourdonnais Waterfront Hotel. The Labourdonnais Waterfront Hotel is widely regarded as Port-Louis’ premier address for sophistication. This 5-star business hotel in Mauritius has undergone major renovations to give it a new and renewed appearance. But the hotel’s world-class multicultural cuisine makes it a landmark.