Destination Gardens By The Bay: Majestic Solar-powered SuperTrees In Singapore

The city-state of Singapore is home to ultra-wealthy selves with a specific lustre of wealth. This sprawling, dynamic capital of the Republic of Singapore occupies the southern part of the island and a playground for high-end luxury hotels, shopping malls and fine dining worth indulging. However, the abundance of Singapore is not limited to its luxury avenues; the city also has a quivering past and attractions that make touring this futuristic city worthwhile. One such attraction that piqued my curiosity is Gardens By The Bay, set among magnificent floral terraces. It was an easy walk across the overhead bridge that connects Marina Bay Sands to Gardens by the Bay. 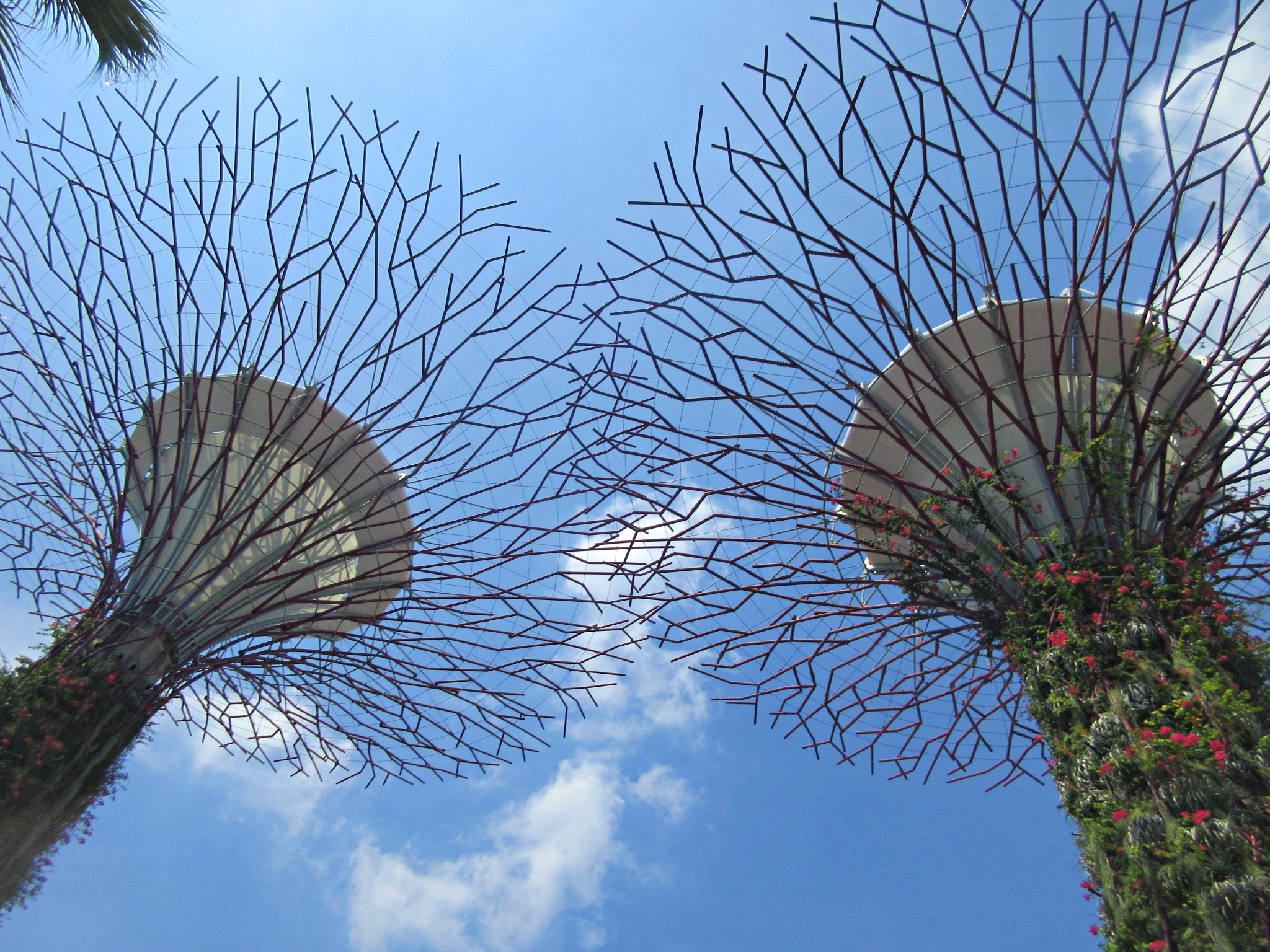 The alternate way to get here is to take Exit B and follow the underground linkway or traverse Dragonfly Bridge or Meadow Bridge into GBTB. Frequent shuttle buses link Bayfront Plaza to the conservatories between 9 AM to 9 PM. Plausibly a destination in its own right, Gardens by the Bay is a botanical park blooming with whimsical sculptures. Estimated at S$1 billion, GBTB is a 100+ hectare fantasyland hosting one of its kind technologically advanced biodomes and Supertrees. In 2019 “Floral Fantasy” was added to the building where floral art meets technology and a 4D ride. 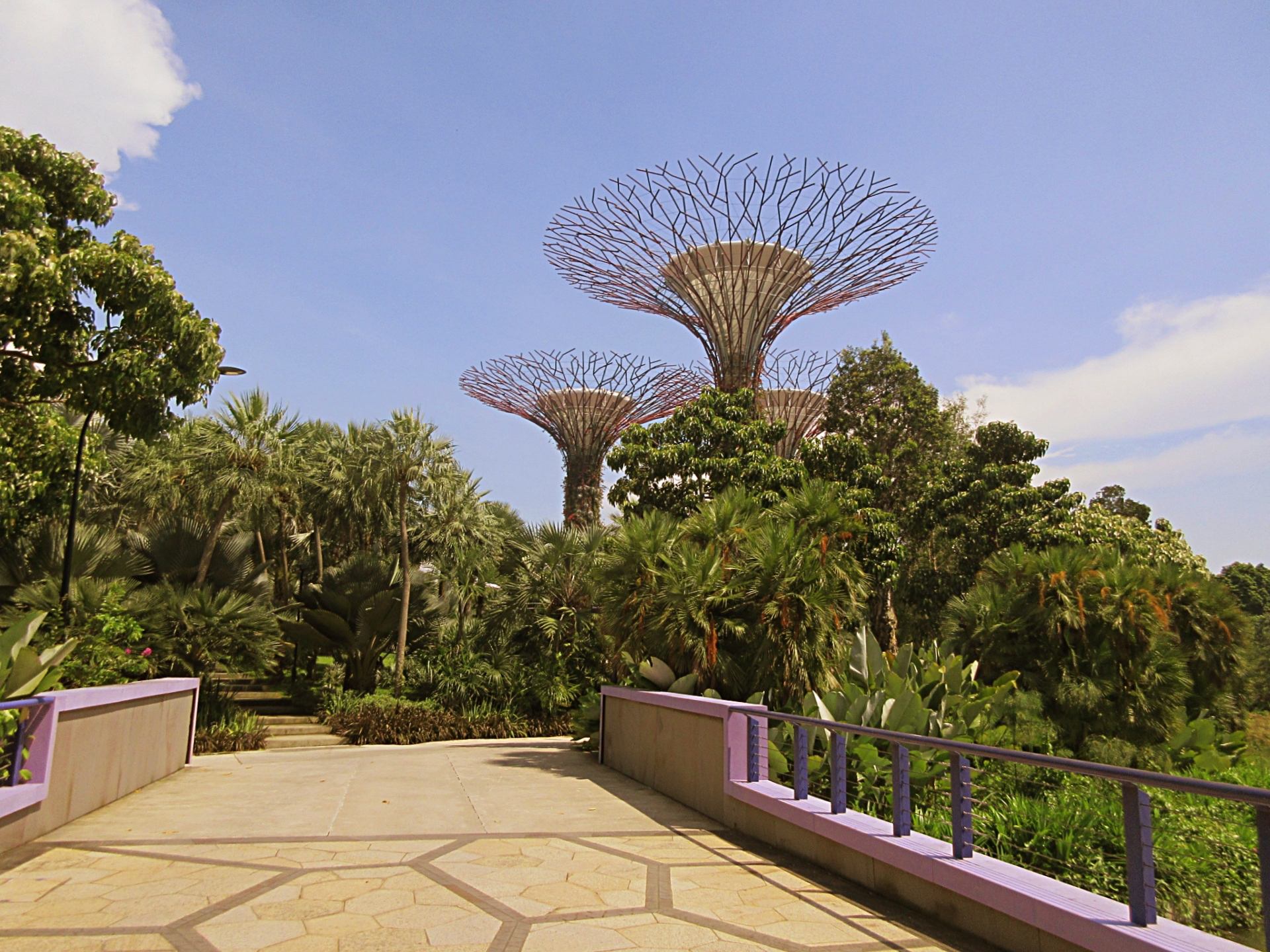 The Flower Dome mirrors the dry Mediterranean environments, whereas the breathtaking Cloud Forest is a tropical affair. SuperTrees link through OCBC Skyway, an observatory with staggering marina views. These SuperTrees explode into glorious lighting at 7.45 and 8.45 every evening. Even though there is no fee for visiting the gardens and the light show, you still need to shell out a nominal charge to get inside the treetop and the conservatories. I nabbed the OCBC Skyway ticket from the ticketing hub, where you can bundle tickets to various attractions available. 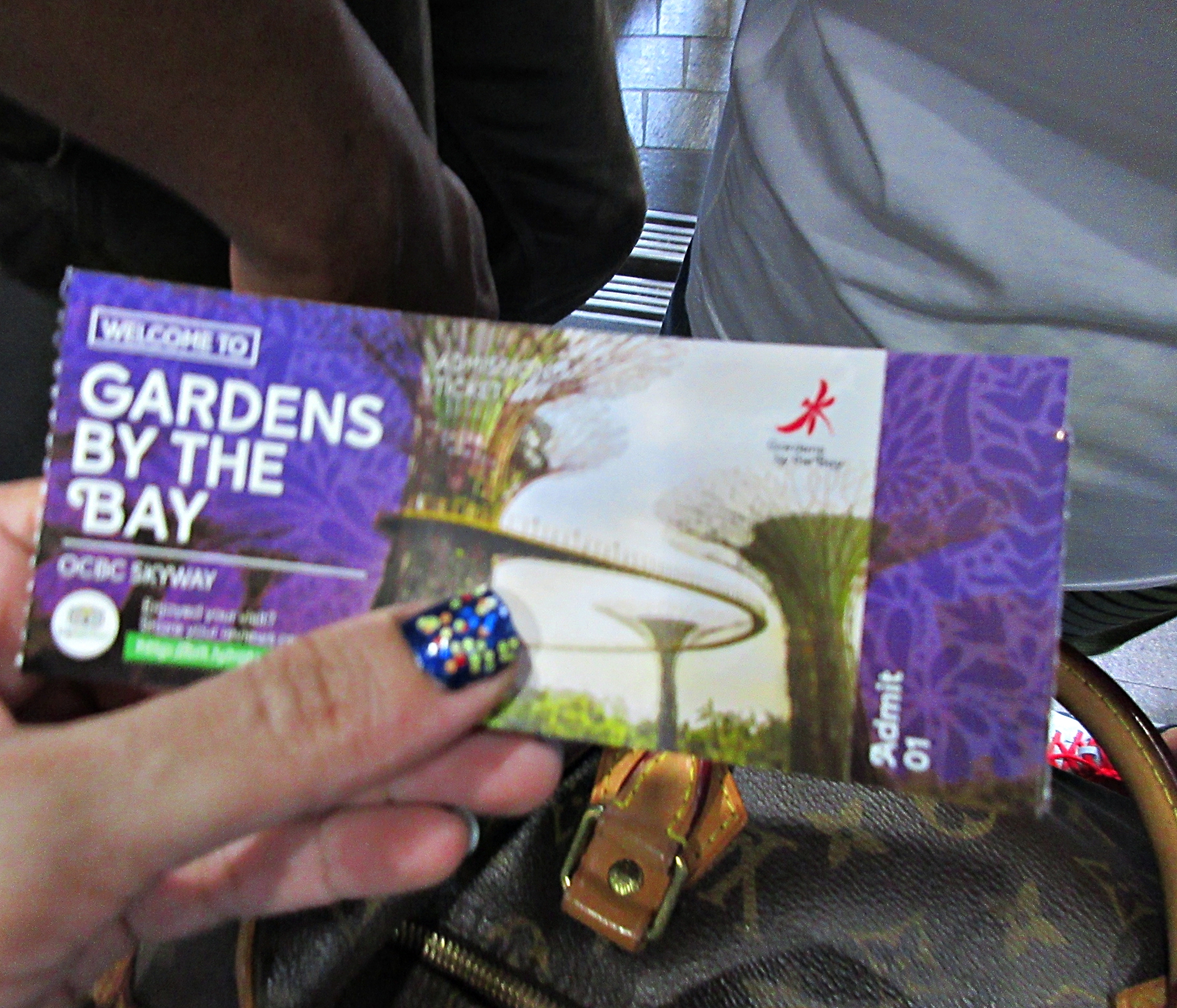 Followed by which, I was greeted, by the extraordinary funnel-shaped supertrees, that elicit bewilderment with their extensive trunk and branches made of metal. Come to think of it, must be daring to develop a horticultural prodigy such as this, housing an unsurpassed collection of natural and artificial plantations. One of the best engineering marvels I have witnessed to date! Ever since its launch, this horticultural hub has triumphantly converted a desolate land into a green course by planting 1mn+ plants in the vicinity of Marina reservoir. To add to my wonderment, I found out that in 2015, GBTB, the world’s largest cooled-conservatory also, managed to grow olive trees in a non-tropical environment. 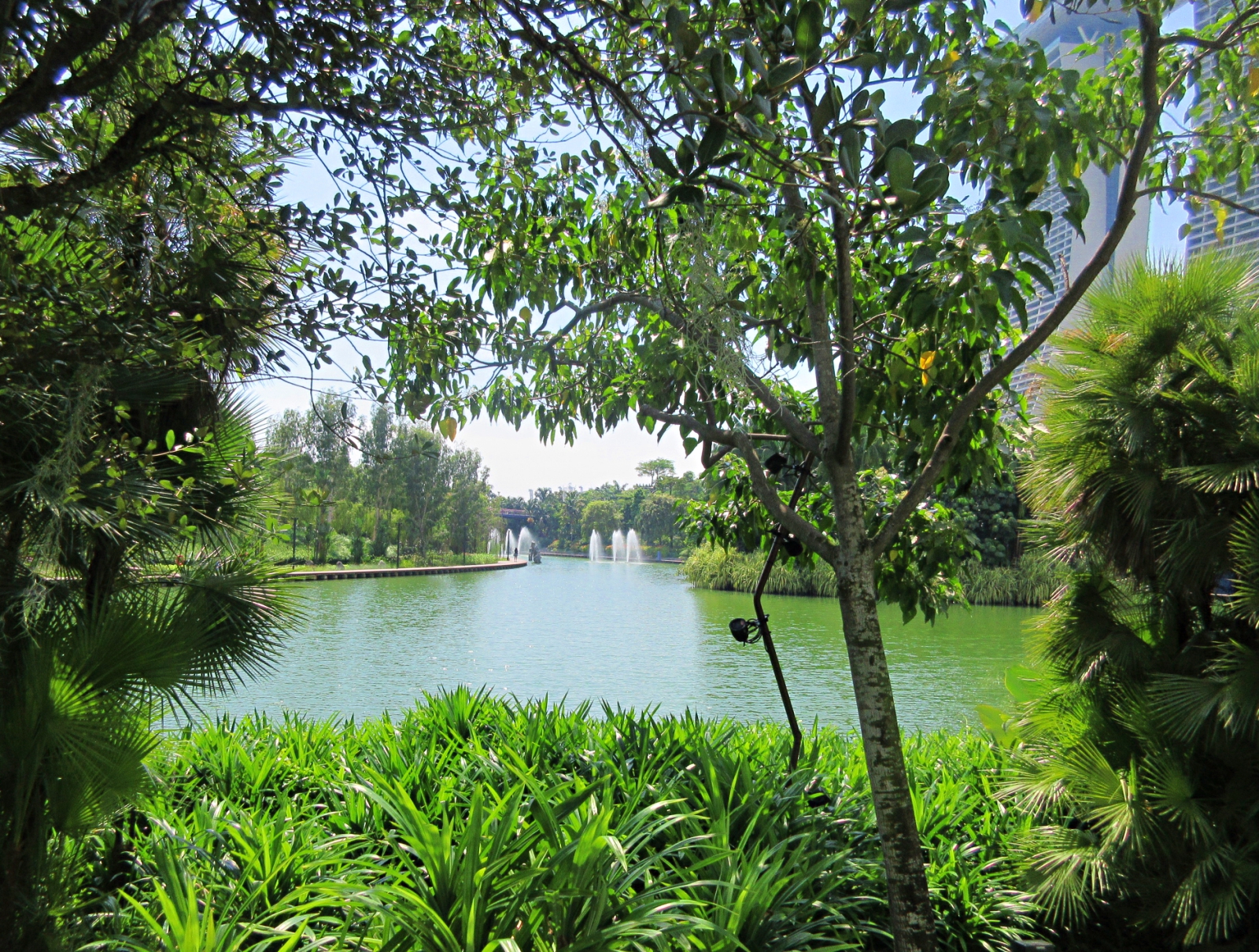 Typically, Gardens by the Bay is Singapore’s idea of transforming a garden city into a city in a garden. For the first few minutes, I was filled with awe as I walked amid blooming haciendas from almost everywhere. At GBTB, you can visit three waterfront gardens, including Bay Central, Bay East, and the largest of all, the Bay South Garden. Undeviatingly west of Supertree Grove are the Heritage Gardens, inspired by Singapore’s three main ethnic groups – Chinese, Malay and Indian. One of the various artworks adding dignity to the grounds is the extraordinary sculpture by British artist Marc Quinn. 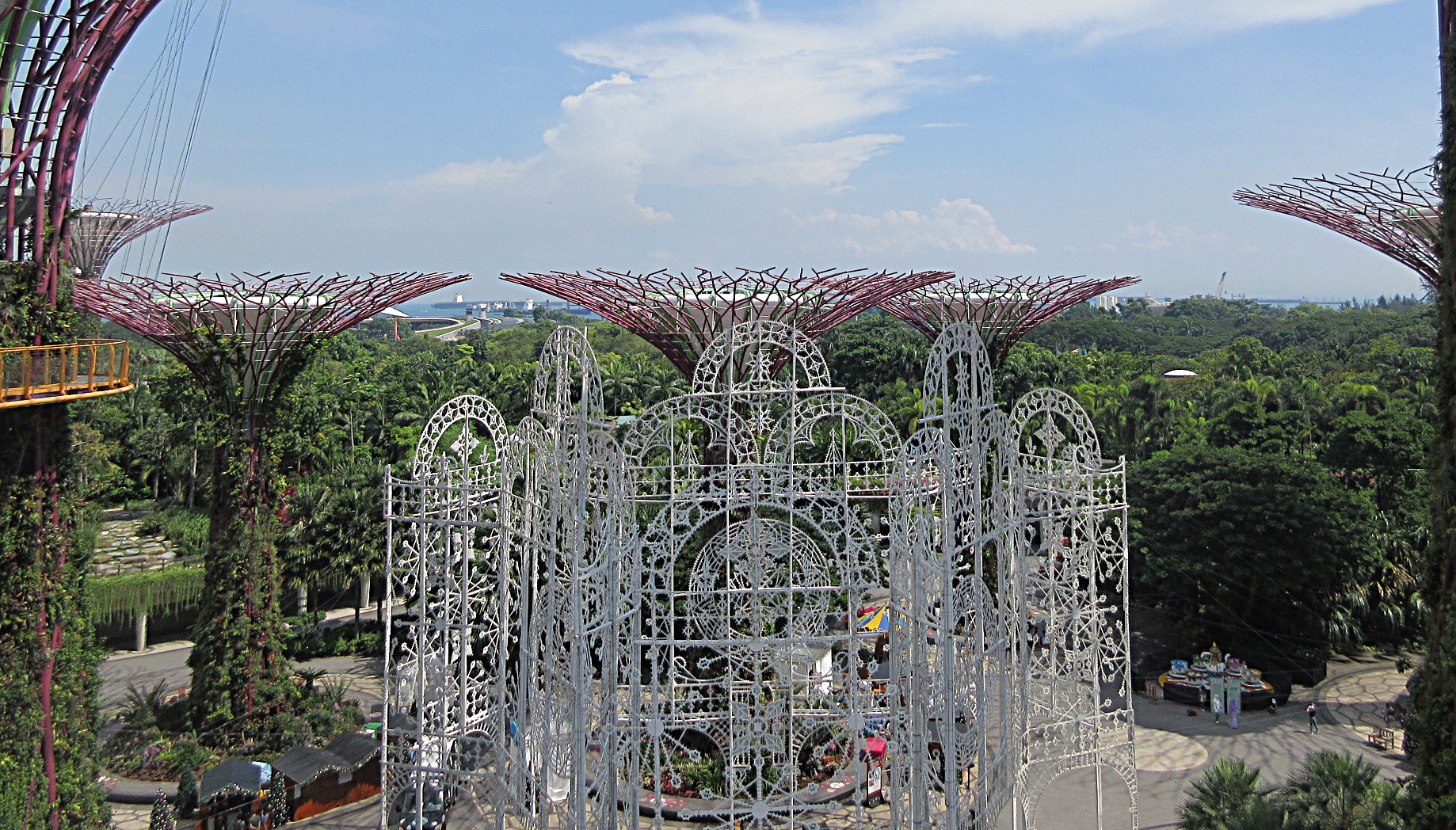 Titled Planet, this sculpture towards the South of the Supertree Grove depicts a 7-tonne infant bobbing over the lawn. Those who have kids in hoist – head to the Children’s Garden featuring an adventure playground, a water playground and a prominent treehouse. The Visitor Centres allow several rental services including, lockers at S$2, a stroller at S$2 and audio guides for S$4. While here, I also observed the towering waterfall of Cloud Forest in broad daylight. 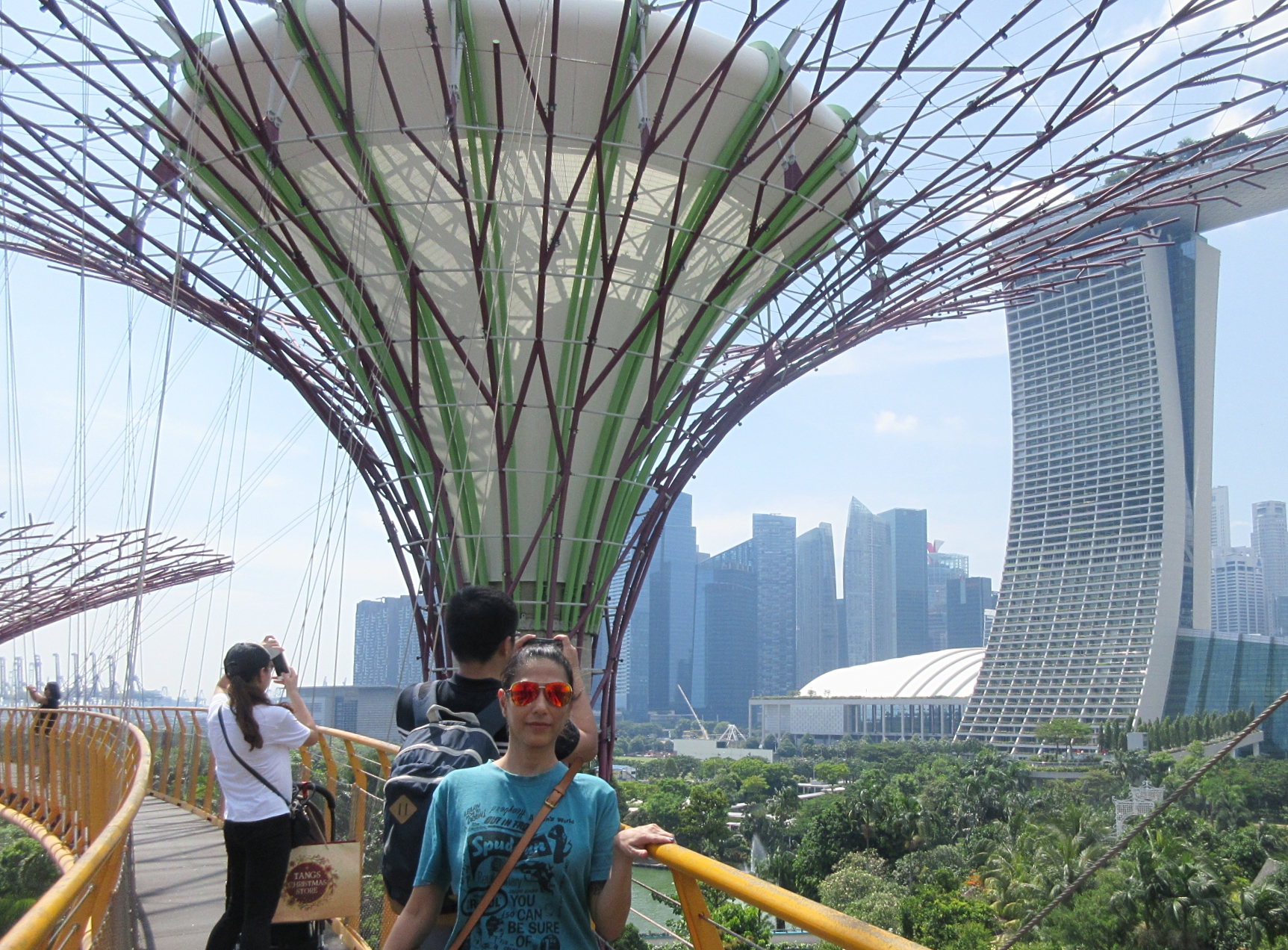 Cloud Forest is an unusual domed gallery of plants on multiple levels, but, most importantly, it’s a fascinating sight to watch sprinklers form artificial mists above you that resemble clouds. I also took pleasure in watching the rare Orchids, dahlias and the bromeliads. While I perpetually stayed away from the carnivorous pitcher plants. I think the unique collection of flora and fauna, the cooled conservatories and larger-than-life Supertrees is what takes GBTB to another level.

Who could even imagine that what is now Gardens by the Bay was once a sea? I couldn’t have left before looking in on the Skyway walk. An afternoon visit gave me the advantage of avoiding crowds. To get to the top, I got my pass from the ticket counter, then took the lift to the third floor. The lift door opens to a bright yellow curvaceous bridge, and as you walk, step by step, you get to take a close look at the solar-powered Supertrees that have redefined the skylines of Marina Bay.

For a personalised experience, you may even dine at the restaurant located inside one of the Supertrees. Irrespective of which part you visit of the Gardens By The Bay, you will love the experience just as I have!

3 thoughts on “Gardens By The Bay: Majestic Solar-powered SuperTrees In Singapore”