Destination Ahmedabad to Kutch: A Glimpse of Gujarat’s Heritage

On a recent trip, I drove nearly 600 km from Ahmedabad to Kutch, passing through, an arch of contrasting cities like Vadnagar, Patan, Modhera, and Dasada. 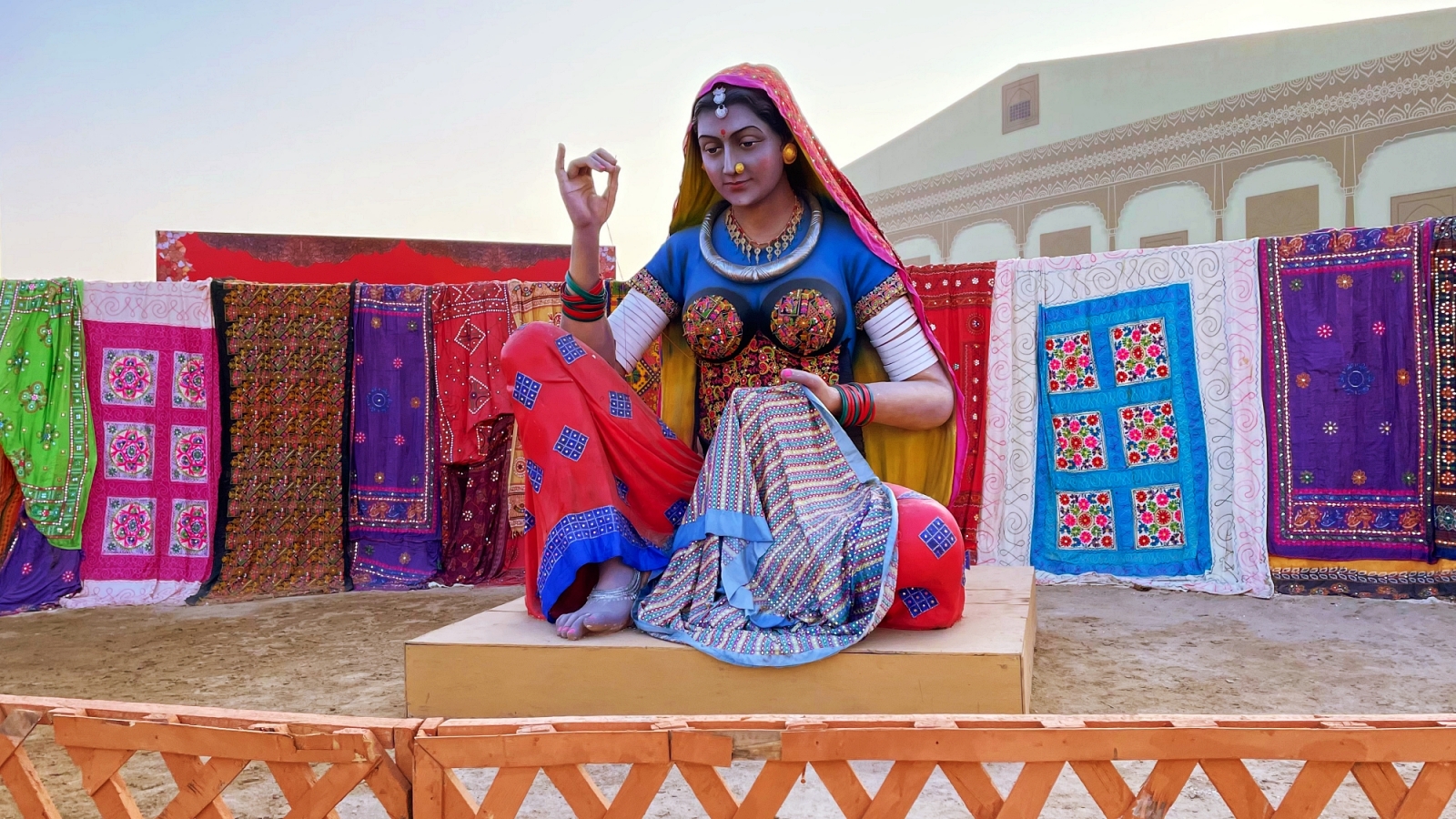 Traditions, heritage and splendid temple architecture mark this state of legends and lions that I hold near and dear to my heart. Every visit to Gujarat entitles one to an immersing experience of contrasting traits and colours at every nook and corner. So much so that it is nearly impossible to overdraw the pervasiveness of its delicately clustered rituals and aesthetics in one short piece of writing. 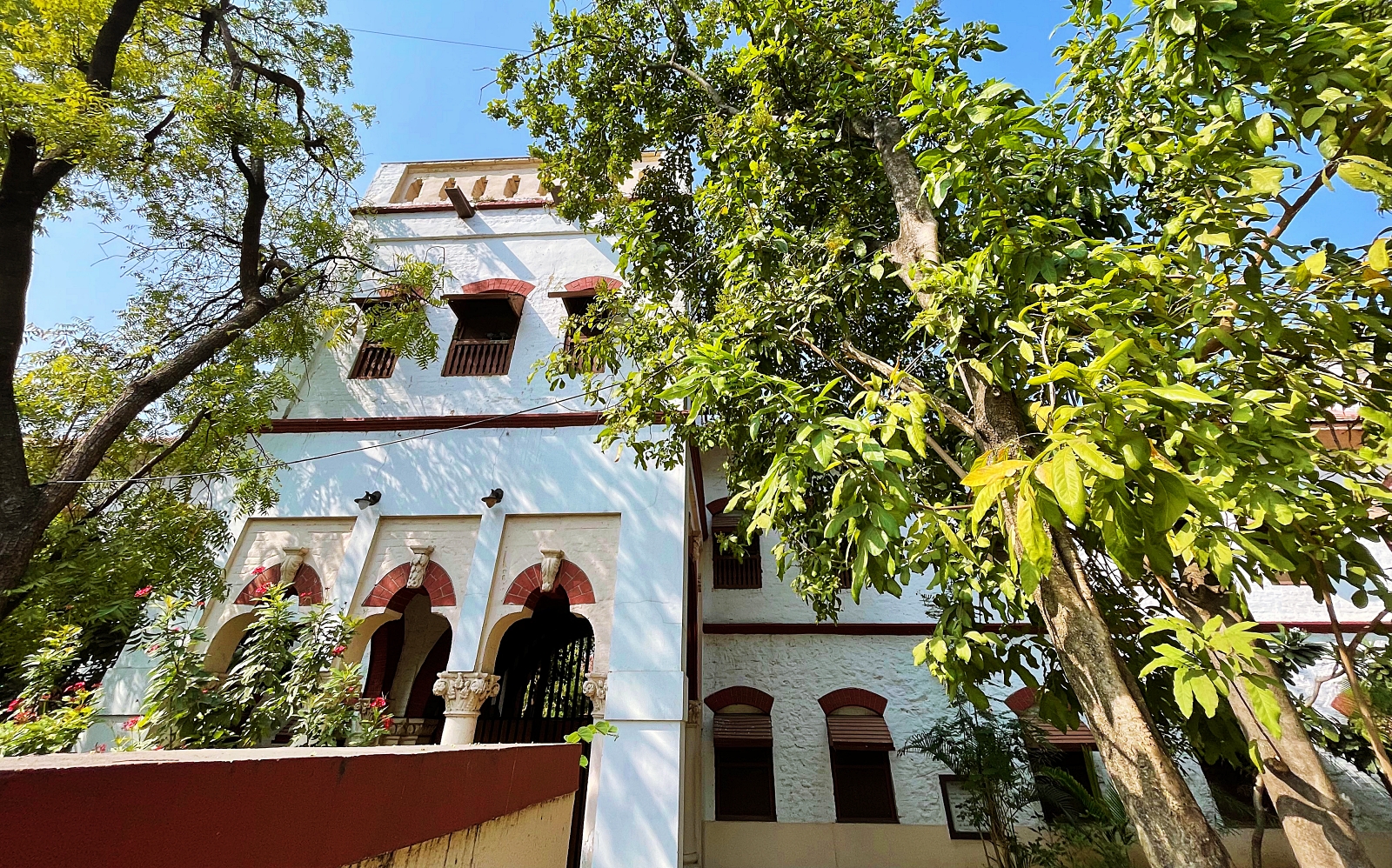 Instead, travel and embrace the customary: like that small idol of Ganesha sitting atop the dashboard of your rental vehicle, the big tribal Nathini tucked deftly into the neat hairdo of Gujarati women, Chai emancipating ginger aroma, the luring smell of freshly fried Fafdas lugged out of an oily iron kadhai or little details brimming at the thresholds of enormous temples at the bending roads. 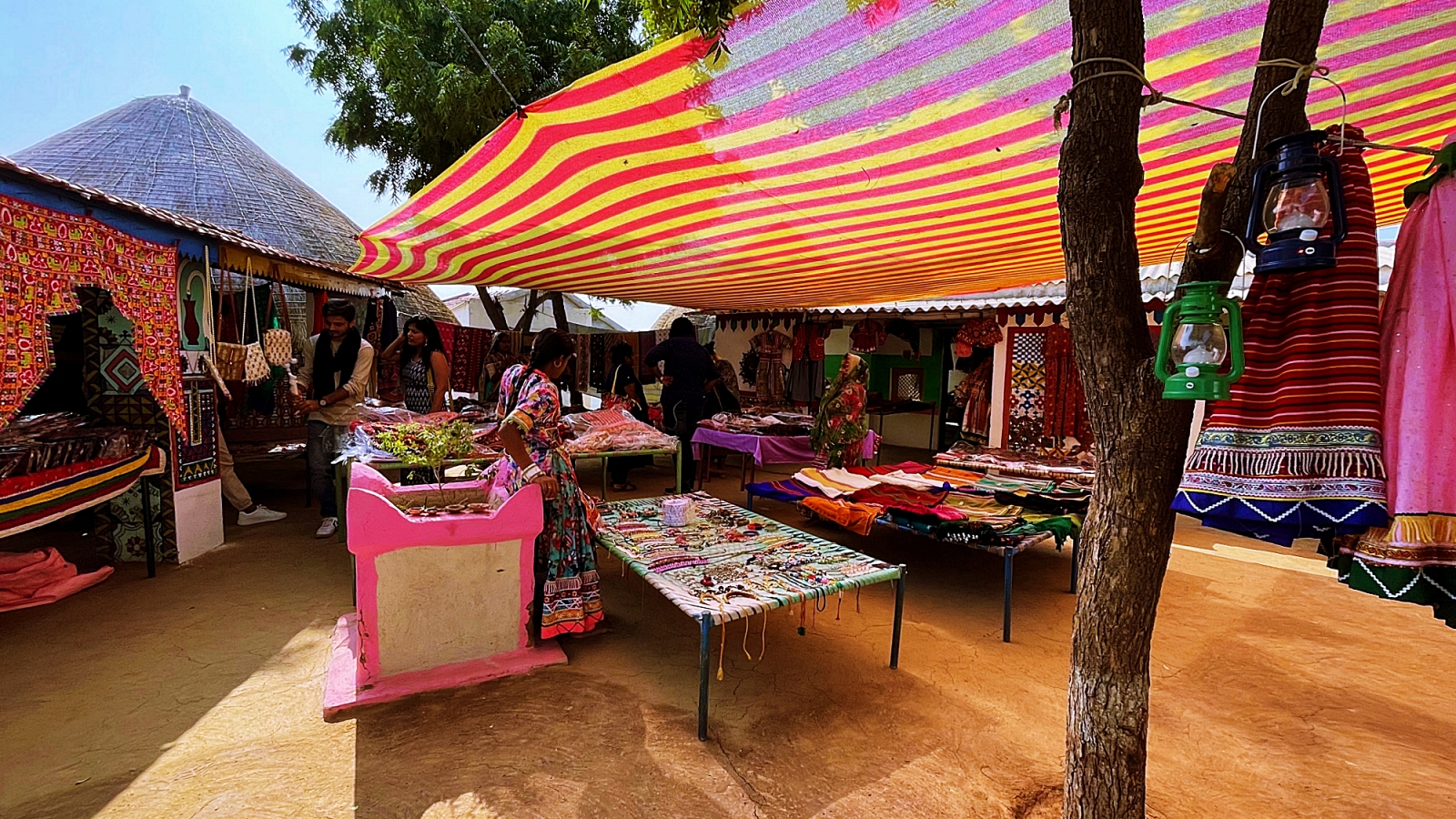 That’s the ultimate tryst with the culture and heritage of the state. On a recent trip, I drove nearly 600 km from Ahmedabad to Kutch, passing through, an arch of contrasting cities like Vadnagar, Patan, Modhera, and Dasada. Conclusively documenting the social dynamics of Gujarat, these cities portray the same culture but have a unique history with distinguishable architecture. Let me explain!

Nearly 100 km from Ahmedabad, we took a brief halt at Vadnagar, an ancient city with a looming past. Not as cold as you’d expect it to be in winters, Vadnagar was rather warm during the day. As we approached the arched gate of the 18th-century Vadnagar railway station draped in quartz pink, Girish Gupta, our expert guide reiterated, how this small town in the Mehsana district of Gujarat is blanketed, by characteristic antiquity that ranges from the 3rd-century Bodhisattva to the 8th-century Mahabharata. 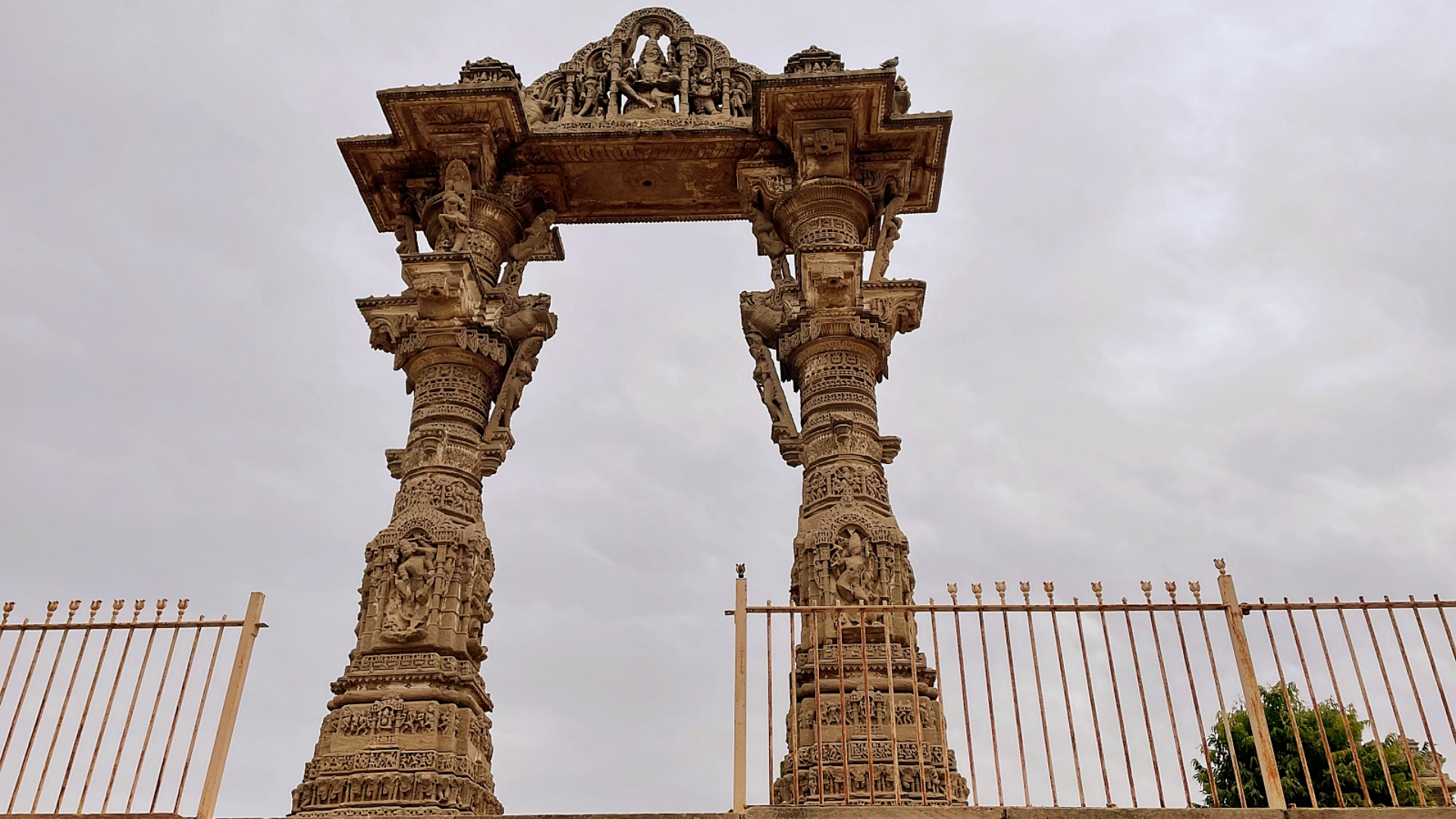 Fifty centuries of yore can easily be pinned down to, hanging threads of textiles, pottery leftovers, embellishments and tool remnants. With frequent mentions in the Purana, as Anartapura (or Anandapura), Vadnagar has etched a phenomenal remembrance of Gujarat’s history and has given it some of its greatest poets, novelists, musicians, artists and performers. When here ramble through the streets of Vadnagar to experience a non-linear perception of time as epochs converge. Touch the 12th-century trails wedged between the old houses burgeoning with artistic doors, carved Torans forsaken by the Solanki dynasty and the votive stupas of the Buddhist monastery in the embattled area. 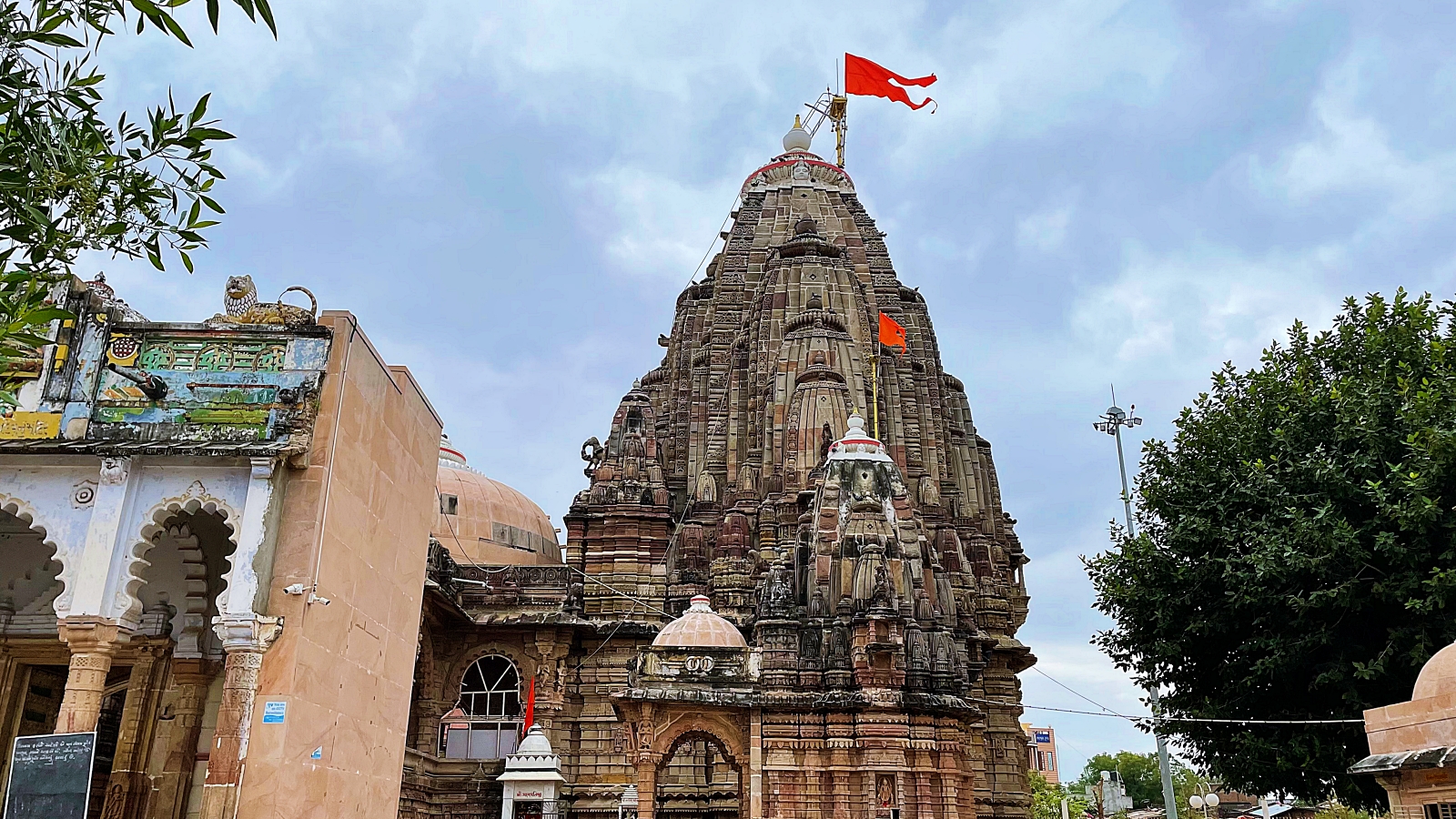 Enjoy a cup of good tea from a local stall, grab a plate of soft, spongy Dhokla from a roadside restaurant and tour the old town, confined within the walls of the six guarded gates. A walk through Hatkeshwar Mahadev temple, exhibiting cutlines from Mahabharat and Ramayana on its Shikhar, serves as a perfect insignia to the sediment of age. Next, I stopped at Patan, the medieval capital of Chalukya and the Chavda dynasties.

Established on the bank of River Saraswati as “Anhilpur-Patan” by King Vanraj Chavada, Patan today stands famous as the home to Rani Ki Vav and Salvi(s) only family in the universe to be weaving authentic Patola Sarees since the eleventh century. Reigned by several Hindu and Muslim dynasties over the years, this small town is also one of the best cities to observe myriad influences of Indo-Islamic architecture. Following a quick lunch at a local restaurant, I went to see Rani Ki Vav, an incredible sightseeing and cardio place. 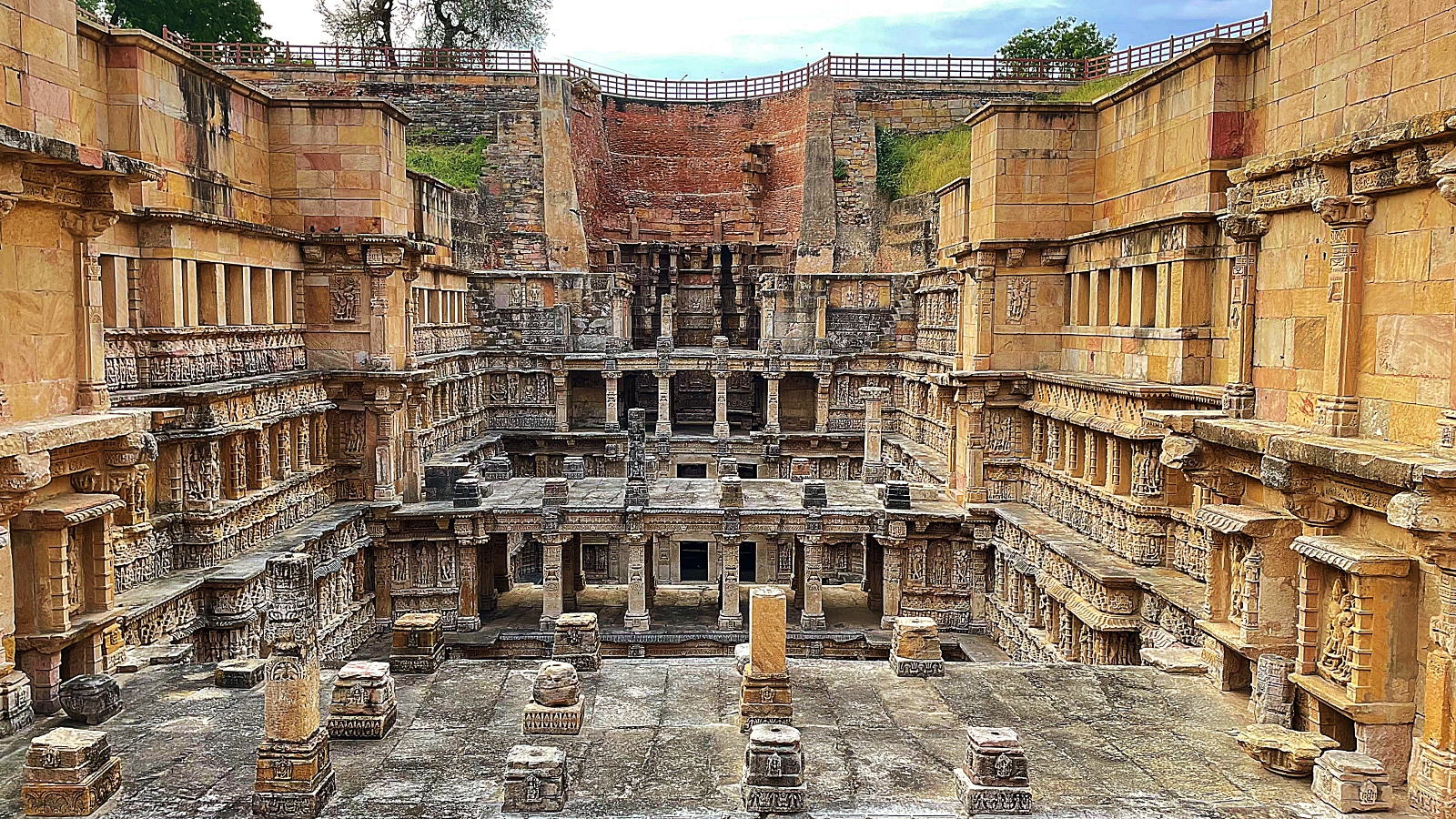 Sprawling across 11.6 acres of well-landscaped area, this stepwell with an inverted temple design is probably, what remains of the ancient Patan from the Chaulukya dynasty, who succeeded Chavdas. Rani Ki Vav, or Queen’s stepwell, is split into seven levels of stairs, and it accentuates the sanctity of water. The stepwell features 500 Vishnu statues and over 1000 other mythical illustrations. Later in the 12th-century, Allauddin Khilji destroyed Patan in ruins. The current town subsequently leapt near the ruins of Anhilwara.

In the 13th-century, Patan served as the HQ of the Delhi Sultanate until Gujarat Sultanate took over in the 14th-century and turned it into its capital. While the ancient fort of the Hindu empire has almost vanished, you can still see one of its walls from Rani ki vav. The new fort (built later by the Subas), is survived by a few of its old gates! Apart from art, architecture and textile, visit the ‘old’ sizeable market of Patan that has been in steady operation since the rule of Vaghelas.

Later in the evening, nearly an hour from Patan, we resumed our drive at Modhera, another small village in the Mehsana district. Formerly known as Dharmaranya, Modhera will intrigue you with its Puranic age connections. Historical records suggest that in Modhera, Lord Ram conducted a Yagna to free himself from the moral guilt of killing Ravana, who was a Brahmin. He then built Modherak, later known as Modhera. 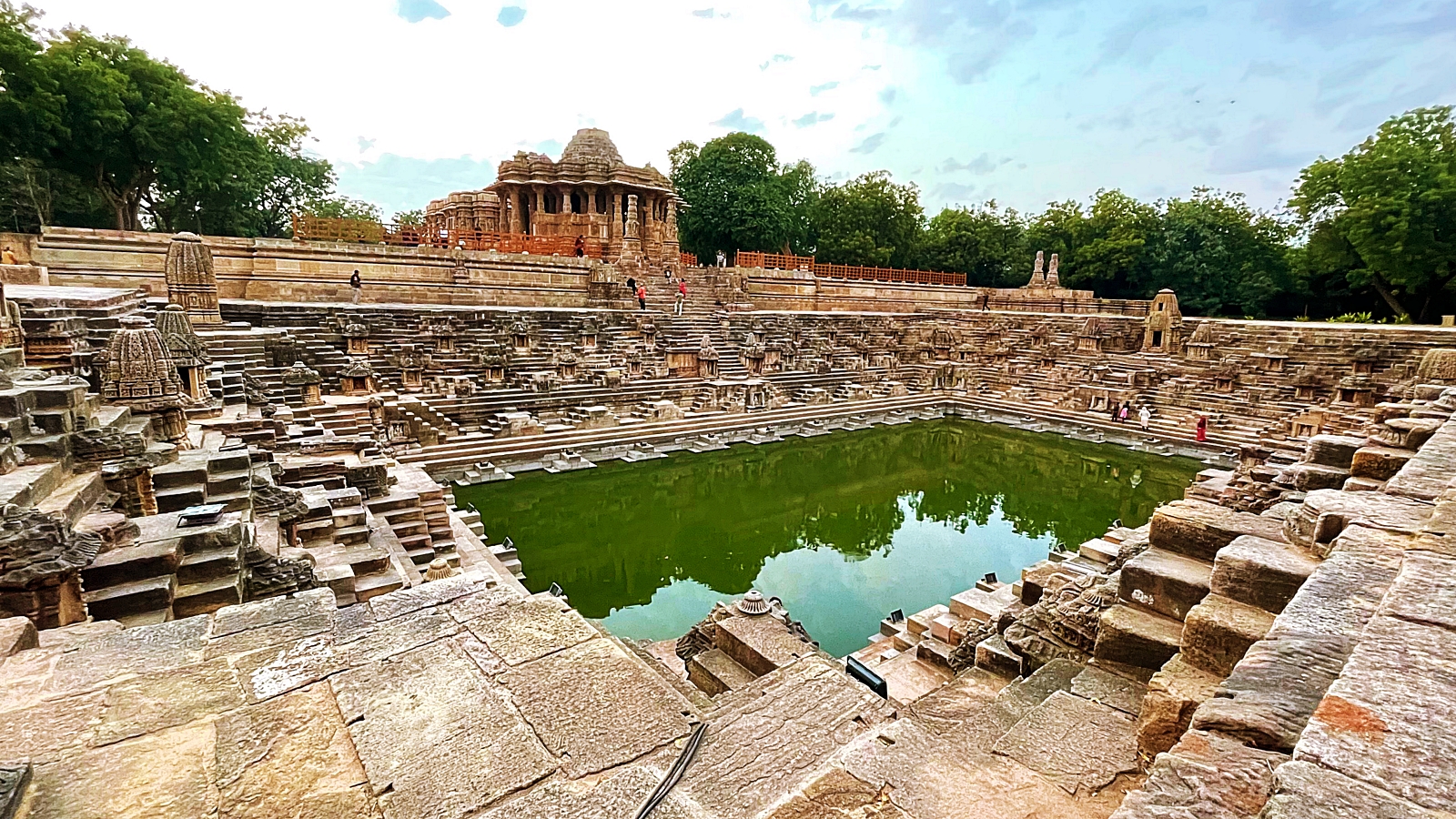 While I couldn’t explore other elements of this beautiful city perched on the bank of the Pushpavati river, I did pay a visit to Modhera Sun Temple, an architectural masterpiece from the Chaulukya era. The 11th-century architecture of Modhera Sun Temple is bound to leave you stunned! It’s more like a gold outburst dotted with some of the greatest sculptures ever. More so in the evening when the temple lights up with hundreds of lights, transforming into an indescribable stage of magic. Those who may have time in hand must also go, see, the 16th-century Gyaneshwari stepwell and shrine in the village.

We covered Modhera to Dasada journey in an hour and a half on state highway 19. Rann Riders, a charming, ethnic destination resort amidst marshes and agrarian pastures, was a perfect night abode. The encircling countryside of Rann Riders, its lush in-house plantations, thoughtfully designed cottages, welcome cultural show and the fresh farm food obliterated every little sign of fatigue. I think Rann Riders is an ideal base for anyone wanting to explore the wildlife, culture, salt pans, weaves and handicrafts of Dasada. 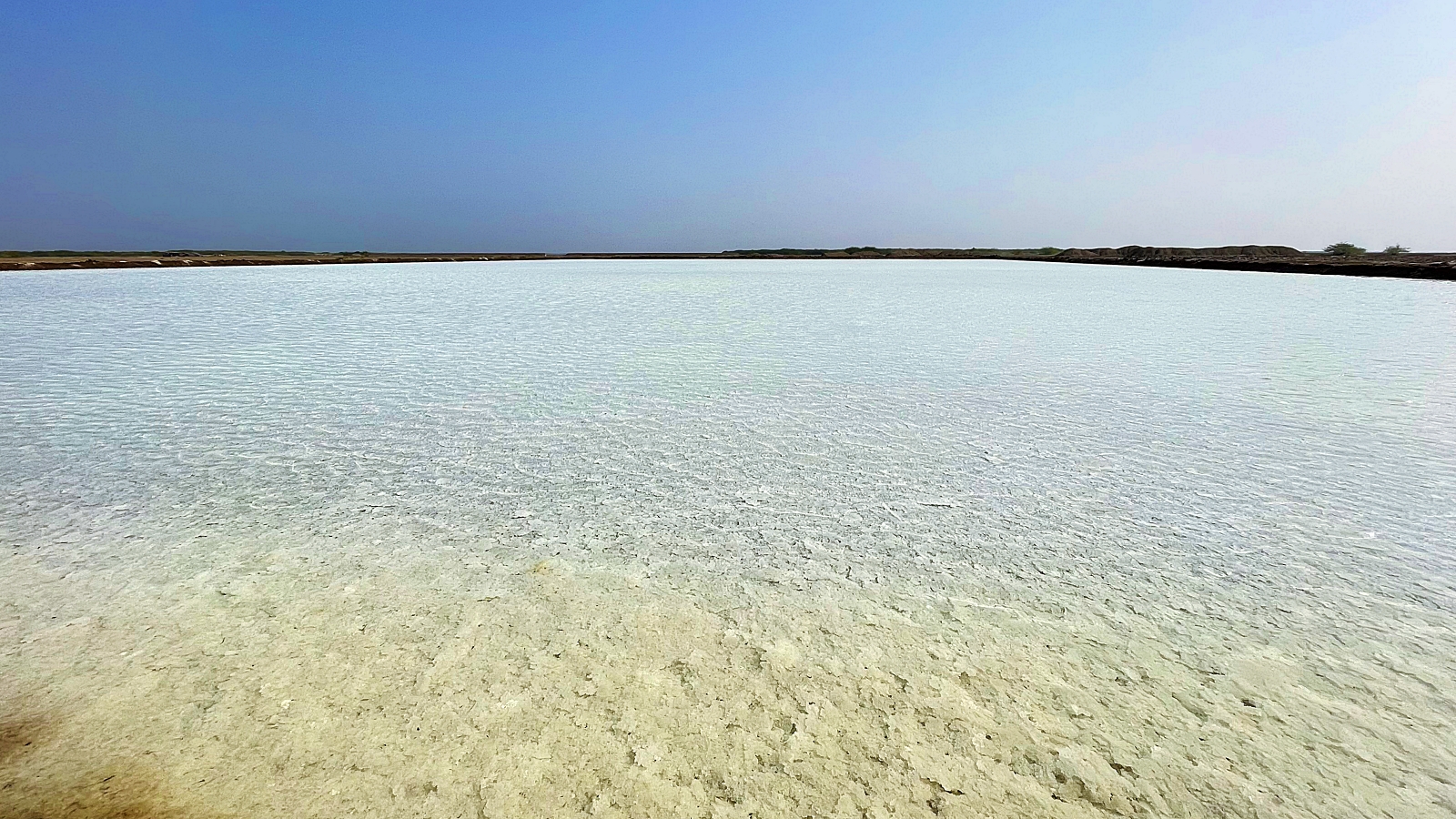 The following day, Rann Riders organised a jeep safari for me to range over the Little Rann of Kutch. This side of Kutch is a birdwatching paradise and a great place to sight Asiatic Wild Ass and salt marshes. The afternoon concluded with me drinking black tea with salt harvesters, and after grabbing a quick lunch at Rann Riders, we embarked on the forward journey to the REAL Rann of Kutch.

Rann of Kutch: The White Desert 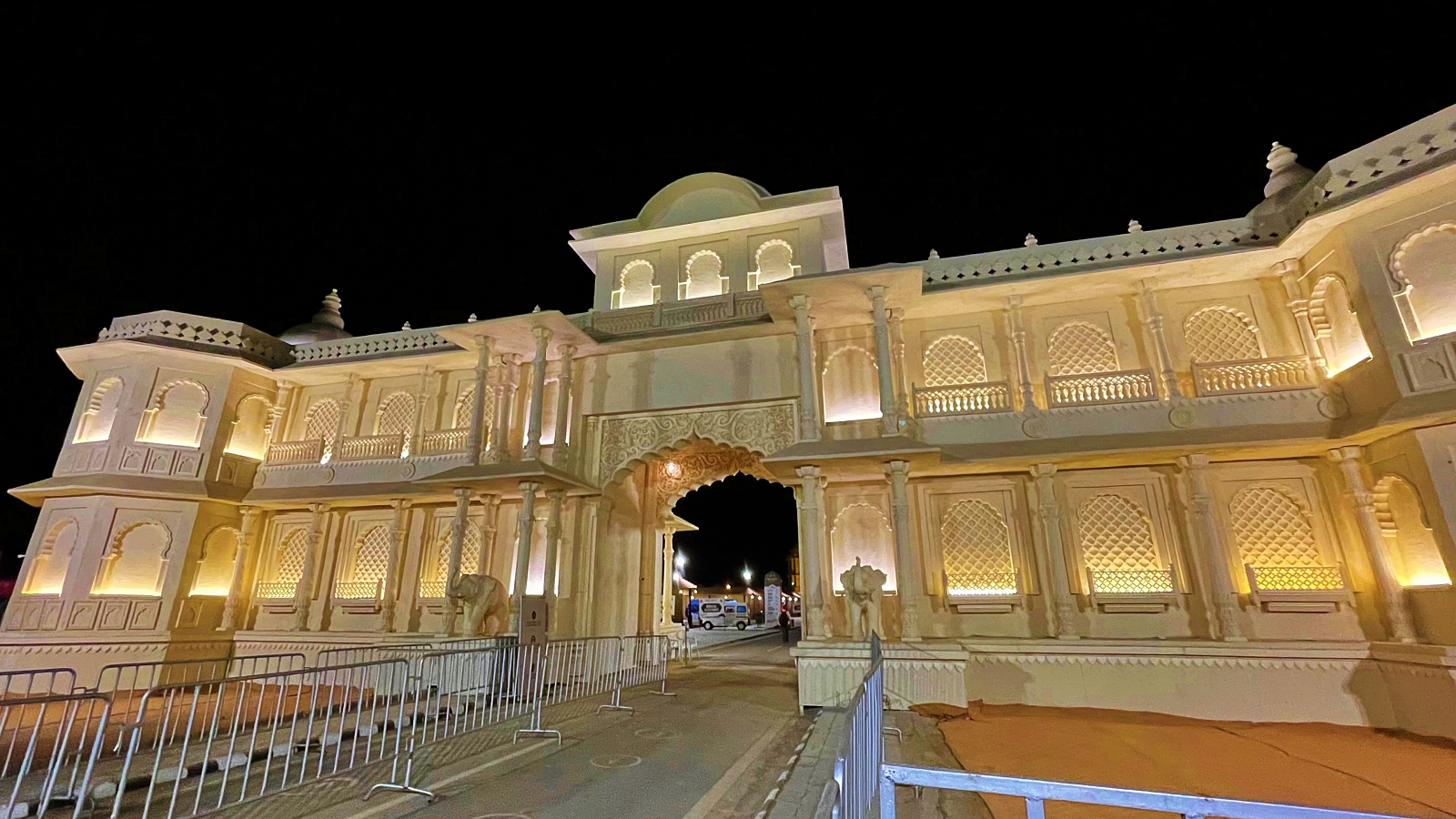 Finally, from the third day I left Ahmedabad, I arrived at the Laluji & Sons Tent City in Kutch to experience the mega event of Rann Utsav. Referred to as the White Desert Festival by many, Rann Utsav is a one of its kind carnival of colours, heritage, culture and food at Dhordo, a village that fondly celebrates nature just as much as every other marvel that enhances its beauty. I was here at the invitation of the Gujarat tourism board, and I have to admit that the arrangements were grand.

I was lodged, in a premium tent, well-equipped with every modern facility such as a queen-size bed, a separate seating area, a partitioned dressing area and an attached washroom with premium toiletries. The air-conditioned tent also comes with a work desk, phone and a tea/coffee maker. Now let me tell you something about Rann Utsav!

Not only does this festival let you embrace the infinite horizons of a barren salt landscape that carries a soothing calmness but, it also allows you to witness the rich culture and artistic heritage of Kutch and neighbouring villages? Although what makes this event so ‘special’ is that it happens at the India-Pakistan border, and it brings you close to the locals in a way you can’t otherwise imagine. 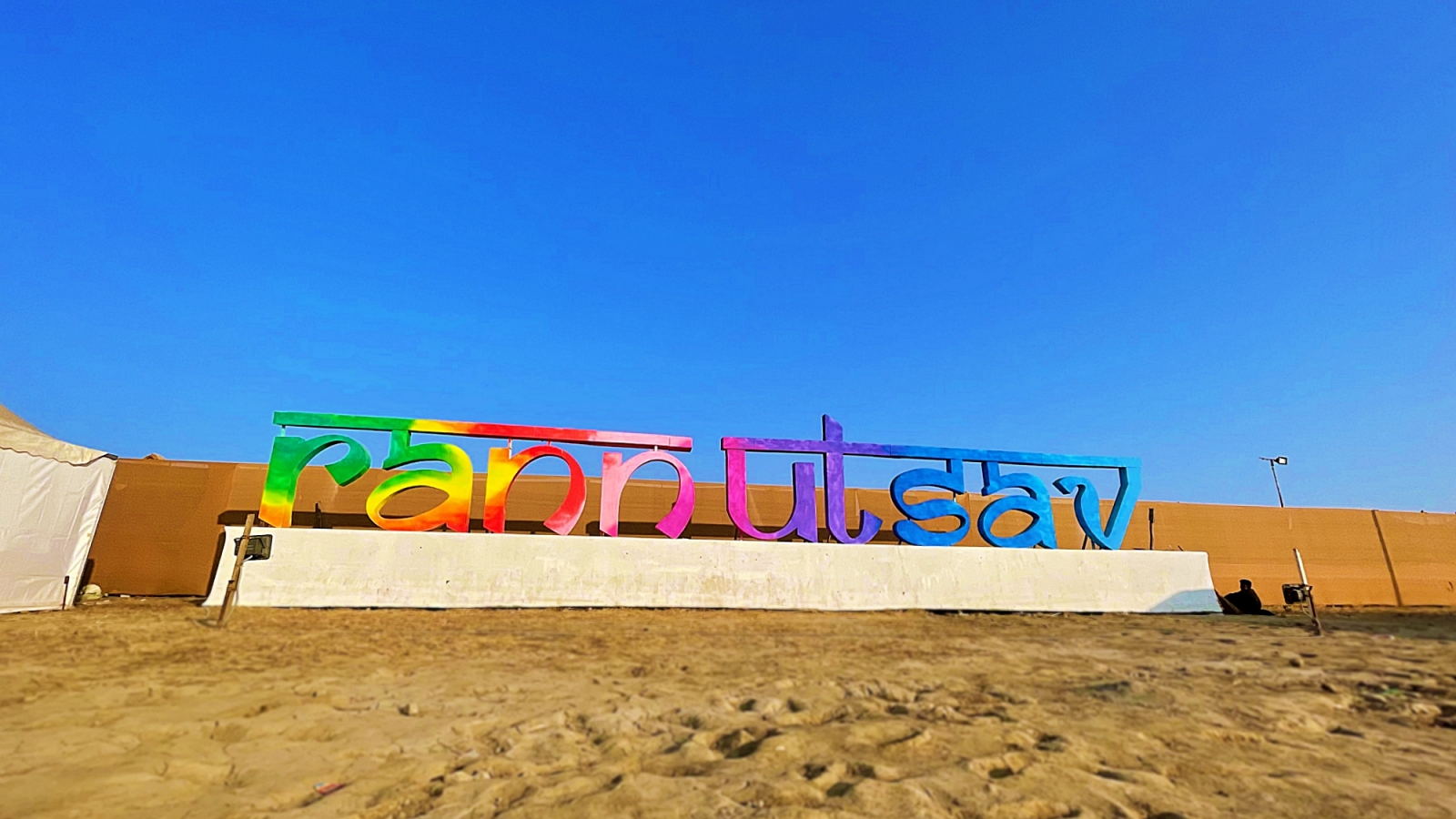 For the best experience: stay at the Tent City and herald the surreal embellishments of Rann Utsav. Be it taking a trip to the vast landscapes of a white salt desert or visiting nearby villages like Gandhi Nu Gam and Nirona to experience the local culture and various forms of art they produce and sell. By staying at the Tent City, you can try your hand at pottery making, buy handicrafts, take an ATV ride, enjoy the surroundings through camel and golf carts, and even indulge in paramotoring, yoga, stargazing and authentic Gujarati cuisine.